Byford Dean Rogness, 84, of Emmons passed away Tuesday, May 20, 2014, at Lutheran Retirement Home in Northwood surrounded by his family. 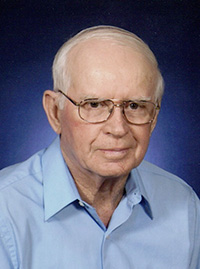 Funeral services will be at 10:30 a.m. Friday at Silver Lake Lutheran Church, 705 Silver Lake Road in Northwood, with the Rev. Randy Baldwin officiating.

Visitation will be from 4 to 7 p.m. today at Mittelstadt Funeral Home, 902 E. Main St. in Lake Mills, and again one hour prior to the service at the church.

Burial will be at Silver Lake Cemetery in rural Northwood.

Byford Dean Rogness was born July 12, 1929, to Alfred and Jenette (Bye) Rognes in Scarville, Iowa. He was baptized and confirmed at Bethel Lutheran Brethren Church. He attended Larson country elementary school and Joice High School. Byford farmed in the Joice, Iowa, Thompson, Iowa, and Oakland areas, and then settled on their farm near Emmons. Byford was born on a farm, grew up farming and farmed the rest of his life. In the off season, he enjoyed woodworking and carpentry with Gene Moen.

Byford was united in marriage to D. Colleen McCoy on Nov. 21, 1948, at Trinity Lutheran Church in Mason City by Dr. Alvin Rogness. They were married 65 years and had four sons.

Byford and Colleen enjoyed traveling to Texas for over 20 years. They also made several trips to Florida, Hawaii, New York and Washington D.C. Byford enjoyed playing golf, playing cards and traveling in his spare time. He wanted to be finished with his planting every year in time for the fishing opener in Longville with his brother-in-law, Paul, and many friends. He also looked forward to spending time with his family and friends at their lake home on Cedar Lake.

Byford was preceded in death by his parents; his son, Tom, and brothers Jerome and Al.