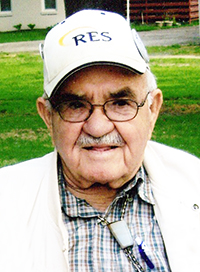 Visitation will be from 4 to 7 p.m. today at Mittelstadt Funeral Home, 902 E. Main St. in Lake Mills, and will continue one hour prior to services at the church on Tuesday.

Harland Lemar Fosness was born on Aug. 18, 1925, in Eden Township, Winnebago County, Iowa, to parents Leonard and Bernet (Fure) Fosness. He was baptized and confirmed at Trinity Lutheran Church in rural Thompson and attended school in Thompson, Scarville and Lake Mills, Iowa.

On Sept. 19, 1942, Harland was united in marriage with Irene Anderson. The couple enjoyed 52 years together and had four children, Bonnie, Jon, Colleen and Diane.

Following his honorable discharge from the military, Harland began farming in the Lake Mills area. In 1954, the family moved to Dodge County. He was a member of the Minnesota Soybean Board, an NFO organizer and a DFL delegate multiple times. Harland was also a very active member of Faith Lutheran Church in Dodge Center and served on the church council.

He loved antique tractor rides, tractor pulls, planting corn and anything to do with farming. Harland also enjoyed dancing, playing cards and coffee with friends and family.  He always looked forward to the completion of harvest so he could head to Texas, where he spent winters for almost 40 years.

He was preceded in death by his parents; wife, Irene; infant brother, William; sister, Mardel; and a great-grandson, Ross Johnson.