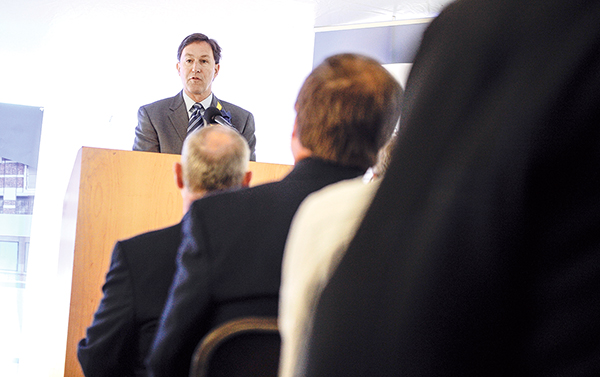 Hormel will build a new museum at North Main Street between Second and Fourth avenues, at the downtown fire site as well as the adjacent Plaza Bar/Ciola’s building.

“We believe that the downtown of Austin is something that can truly set Austin apart,” Hormel Foods CEO and President Jeff Ettinger said during a public unveiling of the project Tuesday.

Community advocates and Vision 2020 volunteers had pushed for the Spam Museum to move into the Austin Utilities downtown power plant in 2012 as part of Vision 2020’s Utilities Building Committee plans.

Vision 2020’s Destination Downtown committee approached Hormel officials last fall about using the fire site formerly owned by the Austin Port Authority as a new location for the Spam Museum. Since, then, Hormel has worked with several organizations including the city of Austin to move existing businesses out of the Ciola’s building and into other spaces.

City leaders lauded the project during the unveiling Tuesday as the Spam Museum regularly draws tens of thousands of visitors each year, which could have a large economic impact for downtown businesses.

“It’s about to get a whole lot better around here,” Vision 2020 director of Vision Creation Laura Helle said.

Hormel will likely begin construction late this year or the beginning of next year, with a groundbreaking set in November or December.

“Hopefully we’ll continue that momentum and utilize that space,” he said.

Hormel’s corporate office renovations could take place this fall and early next spring, and Hormel spokespeople say the Spam Museum may close during the museum’s offseason later this year as part of the move.

If all goes well, the new Spam Museum will open in the spring of 2016 in time for Hormel’s 125th anniversary. Yet Hormel officials, city leaders and area volunteers hope the museum announcement will help Vision 2020 accomplish other goals as well.

“We do hope that this announcement will be a catalyst to some of the other Vision 2020 projects as well,” Ettinger said. “We also hope that particularly this project is a catalyst to the downtown.”