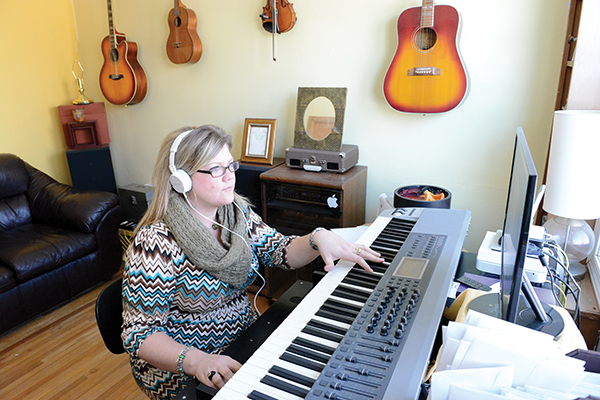 Musician Jennifer Ordalen practices a song in her home.

Q: How long have you been interested in music?

A: Since I was about 3 years old. There’s so many people I have had help from and have helped inspire me.

Q: Are you only a vocal musician?

A: I like to play violin, piano, guitar, and I’m learning to play the ukulele.

Q: How many songs have you recorded?

Q: Do you think about being a singer and songwriter?

A: I’m not comfortable with that. I do that for myself, but I’m not comfortable. I’ll leave that to the others who have a knack for it. Everyone tries to be a singer and songwriter. I’m OK only being a singer. What a sad place it would be if there was all these writers who had this music they couldn’t share with others. I’ll be their vehicle if they’ll be mine.

Q: Tell me about your album?

A: My first album, “Cracks in the Concrete,” was such an awesome experience. A really bad experience led into a really good one. I was working on another album with some other people and through them I ended up meeting my producer, Steve Cropper, and some major musicians. I was invited to Nashville and I took the chance. My parents and I went. I started that in the summer of 2008. I released it in the spring of 2010.

Q: What genre does it fall into?

A: They don’t really know where to put me, which is kind of strange because I think it’s pretty cut and dry. I think I sound country. If you talk to anybody in the northern half, they will say, “Yep, country.” You take me to Nashville and they say, “You are not country.” They put me in the adult alternative category.