Mary Madeline (Alcorn) Brown, 94, of Albert Lea, formerly of Walnut Grove, passed away on Saturday, May 3, 2014, at St. John’s Lutheran Community in Albert Lea. Mass of Christian burial will be at 11 a.m. Thursday at St. Paul Catholic Church in Walnut Grove. Visitation is from 5 to 8 p.m. Wednesday at Walnut Grove Funeral Home with a prayer service and rosary at 7:30 p.m. Visitation will then continue one hour prior to services at the church on Thursday. Burial is in Calvary Catholic Cemetery. Online condolences may be sent to www.stephensfuneralservice.com. Stephens Funeral Service: Walnut Grove Funeral Home is assisting the family with arrangements. 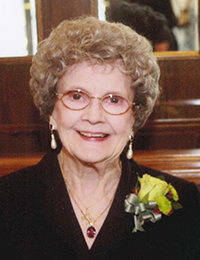 Mary Madeline Hughes, daughter of Thomas and Mary Margaret (Miller) Hughes, was born Oct. 27, 1919, in Griswold, Iowa. She and her family moved to Red Oak, Iowa, followed by Shenandoah, Iowa. In Shenandoah, Madeline attended Catholic school through the sixth-grade, and then moved to Corning, Iowa, where she graduated from Corning High School in 1936.

After high school, Madeline resided in Corning and worked at McClelland Drug Store until her marriage to James C. Alcorn of Walnut Grove on April 17, 1945. They farmed north of Walnut Grove until moving to town in 1972. She and Jim treasured their 39 years together prior to his passing on Dec. 26, 1984.

Madeline dedicated her life to caring for her family and spent many years managing a farm household. She also worked as a clerk at Butson’s Variety Store and in the Sentinel Tribune newspaper office in Walnut Grove. She retired at 75 years of age.  Madeline married John W. Brown of San Antonio, Texas, on Oct. 4, 1997. Madeline and John had been high school classmates and friends. They resided in San Antonio during the fall and winter months, and Walnut Grove the remainder of the year. In Aug. 2009, they moved to Albert Lea. Madeline and John were blessed with nearly 17 years of marriage. Madeline dearly loved her family, cherished her relationship with the Alcorn family and was a loyal friend to many. She enjoyed traveling, gardening, baking, playing cards, crocheting and watching professional sports.