NRHEG juniors get a look at reality 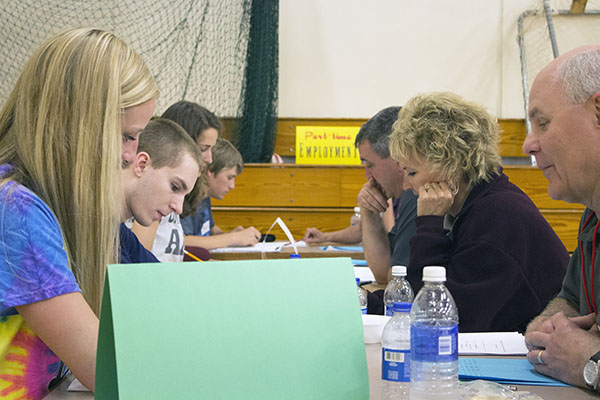 NRHEG juniors sign in at the bank to start their Reality Day on Wednesday. – Hannah Dillon/Albert Lea Tribune

For the past three years, New Richland-Hartland-Ellendale-Geneva High School has been giving juniors a dose of reality. 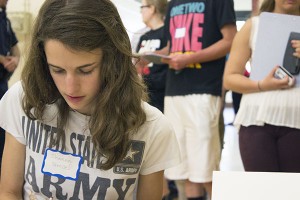 The class of 70 juniors at NRHEG High School spent their day in the gym, learning about money management, goal setting and career planning. Reality Day is a required activity for the business education class.

Students are given a job, marital status, salary and credit card limit. They also have to factor in loans and debt. Some students also had children and pets to account for.

Dinneen said the students first sign up at the “bank,” which is run by several volunteers. In total, there were 23 volunteers this year, including a pastor, police officer, lawyer, school board member, two bankers and more.

Schumacher said things change every year, but the past two years of the program have been good. Dinneen and Schumacher both said that it can be fun reading the comments that the students leave about Reality Day, as many of them don’t realize how expensive adulthood can be.

In addition to their regular expenses, there are a variety of “life’s unexpected events” that can occur, just like in real life. A police officer goes around and randomly hands out tickets. The school nurse gives out health-related events, such getting an illness or having a baby. Schumacher said there are also a few “Miss Mayhems” who give out other unexpected events, like failing appliances. 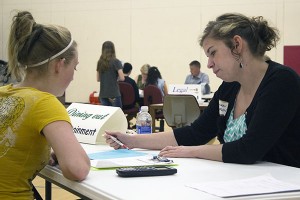 Sarah Larson, a former NRHEG student and a marketing executive at AgStar, helps students with Dining Out and Entertainment during Reality Day on Wednesday. – Hannah Dillon/Albert Lea Tribune

One student received an unexpected event about his children wanting a pool, and Schumacher said that he said “my kids don’t need a pool!” and instead said they could buy a plastic kiddie-pool instead.

Conservative was the theme of this group of juniors, school board member Rick Schultz said. He said that this group spent less on entertainment and instead spent more providing for their children.

And the kids really do get into it. The students take Reality Day seriously and are well-behaved, Schultz said.

Juniors Mikayla Pope and Kristina Palmer said that being an adult was more expensive than they realized.

Pope said that while this activity gave her a good look at the reality of adulthood, she said that her life would probably be different by the time she was in her 20s. She said she probably wouldn’t have kids or a dog, nor would she have the job she was assigned — which was a journalist.

Dinneen said that there has been “awesome” support for this activity. Through grant money she purchased clipboards for all of the students to use. The State Bank of New Richland donated debit cards and the First National Bank in Waseca donated checkbook registers for the students to use to make the activity as realistic as possible.

Dinneen said that one big flattery this year was that a banker from Waseca was present to observe the activity, as the Waseca school district is interested in starting up a program like this as well.