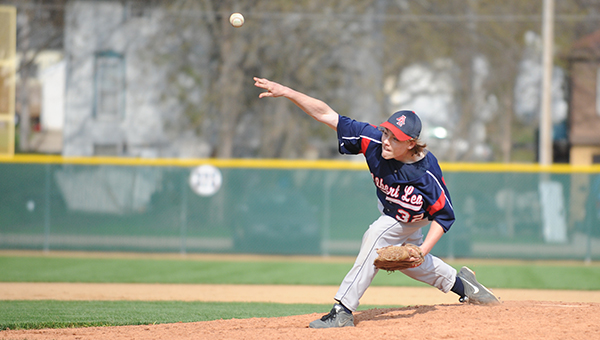 Despite showing improvement in Game 2, the Albert Lea baseball team was swept by Rochester Mayo Wednesday in a doubleheader at Hayek Park.

“Mayo is a tough team,” said Albert Lea coach Joe Sczublewski. “They have the best pitcher we’ve seen all year.” 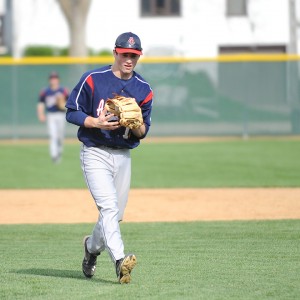 Albert Lea shortstop Johnathan Fleek empties his glove after catching a pop-up for the third out in the top of the fifth inning Wednesday against Rochester Mayo at Hayek Field. — Micah Bader/Albert Lea Tribune

Jackson Douglas led the Spartans past the Tigers 4-0 in Game 1. He went the distance on the mound, struck out 14 batters, and Johnathan Fleek was the only batter to produce a hit for Albert Lea.

Tristin Muilenburg pitched all seven innings for the Tigers. He didn’t strike out any batters, but he showed control by minimizing walks to two.

“Things are getting a little better,” Sczublewski said. “For the most part, our guys are starting to hit their spots.”

In Game 2, Albert Lea cut into a 3-0 deficit when E.J. Thomas crossed home plate in the bottom of the third inning, but the Tigers lost 4-1.

“We had opportunities to cash in and break the game open,” Sczublewski said. “We just couldn’t get the timely hits.”

Mason Hammer led the Tigers offensively by going 2-for-3 at the plate. Kole Smith, Parker Mullenbach, Jake Thompson, Thomas and Fleek each tallied one hit.

Fleek also went the distance on the mound for the Tigers. He struck out three batters and allowed eight hits, one earned run and a base on balls.

In contrast to allowing 15 base on balls given up against Rochester Century earlier this season, Albert Lea walked only three batters throughout the doubleheader.

“It was a breath of fresh air,” Sczublewski said. “They weren’t just throwing the ball, they were pitching. It was encouraging to see.”

The Scarlets (7-3 overall, 6-3 Big Nine Conference) are on a five-game winning streak.