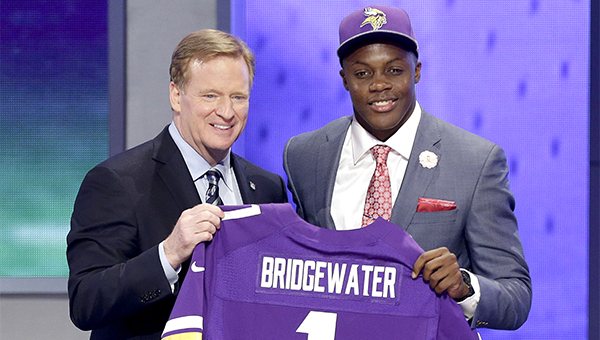 Former Louisville quarterback Teddy Bridgewater, right, poses with NFL commissioner Roger Goodell after being selected by the Minnesota Vikings as the 32nd pick in the first round of the NFL draft Thursday in New York. — Associated Press

EDEN PRAIRIE — The Minnesota Vikings entered the first round of the NFL draft with glaring needs at linebacker and quarterback.

They hit on the linebacker early, then squeaked in at the end of the night to grab what they hope is their quarterback of the future.

The Vikings drafted UCLA linebacker Anthony Barr at No. 9 — passing on Texas A&M quarterback Johnny Manziel twice in the process — then traded back into the first round with Seattle at No. 32 to get Louisville quarterback Teddy Bridgewater.

The Vikings reportedly tried to trade back into the first round to take Manziel, but the Cleveland Browns grabbed the former Heisman Trophy winner at No. 22. So they sent their second- and fourth-round picks to the Seahawks to get Bridgewater, who threw for 3,970 yards, 31 touchdowns and four interceptions with the Cardinals.

Bridgewater was originally predicted to be a top 10 pick early in the college season, but after a pro showing at his pro day workout, he slid down the draft board. The Vikings had a private workout with him in Florida, and general manager Rick Spielman said he liked what he saw.

“Some of the flaws you may have seen during the original pro day, as soon as you saw him getting coached, those flaws were getting corrected,” Spielman said.

Barr was a running back at UCLA two years ago before making the switch to linebacker and racking up 23 1/2 sacks in his last two seasons.

“I’ve never had a linebacker, even thinking back to my Dallas days, that has the size and speed and all the things that this guy has,” said Zimmer, who was participating in his first draft as a head coach.

The Vikings entered the first round with glaring needs at quarterback and linebacker.

When they went on the clock at No. 8, and again at No. 9, they had both options sitting right there in front of them. With the crowd at the team’s draft party in downtown Minneapolis hollering, “Johnny Football! Johnny Football!” the Vikings went another direction, apparently with designs about making a run at Manziel as he fell down the draft board.

With long-time leaders Jared Allen and Kevin Williams departing, the Vikings saw upgrading the pass rush as imperative in a division where they face star quarterbacks Aaron Rodgers, Jay Cutler and Matthew Stafford.

The Vikings started the night with the eighth overall pick, but traded down one spot with Cleveland, picking up a fifth-round pick to do it. The Browns took Oklahoma State defensive back Justin Gilbert, another player the Vikings were believed to have been interested in, and Minnesota pounced on Barr the next pick.

The 6-foot-5, 255-pound Barr ran the 40-yard dash in a blazing 4.44 seconds and the Vikings hope he can bring some much-needed athleticism and playmaking to an undistinguished linebacker corps. Spielman, the general manager, said he’s heard comparisons to Jason Taylor, Chris Doleman and Von Miller, and evaluated Barr as the best edge pass rusher in the draft after No. 1 overall pick Jadeveon Clowney.

“You just don’t pass up these athletic-type players because they’re too rare and too hard to find,” Spielman said.

The Vikings have been searching for a young franchise quarterback ever since Daunte Culpepper went down with an injury in 2005. The Jacksonville Jaguars chose Blake Bortles at No. 3 and Spielman apparently envisioned pulling off a similar deal to last year, when he traded back into the first round to grab receiver Cordarrelle Patterson.

Spielman couldn’t quite pull off the deal at 22, but didn’t stop there. Spielman said it was important to get a quarterback in the first round, which gives them a chance to have a fifth-year option on Bridgewater’s contract and keep him under team control for a year longer than had they taken one in the second round.

“I felt very confident tonight that I was going to end up in Minnesota some way, somehow,” Bridgewater said on NFL Network.

With veteran Matt Cassel re-signed for another two years in the offseason, Bridgewater doesn’t necessarily need to feel the pressure to start right away.

“There is no pressure on this kid to play right away,” Spielman said.