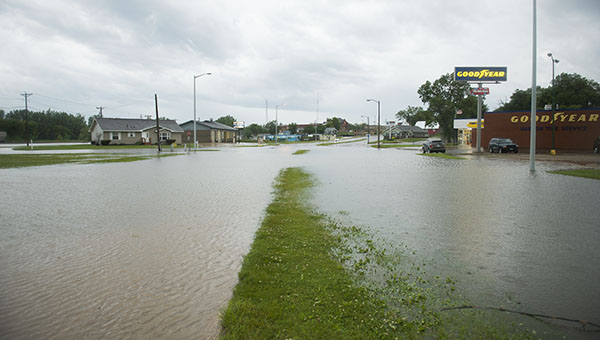 A flash flood watch is in effect until 1 a.m. Friday, but it might as well be a warning because many streets and low-lying areas of Albert Lea are flooded today.

Another round of thunderstorms moved through — the third in three days. Rainfall recorded at the Albert Lea wastewater treatment plant this time as of 8 a.m. was 1.59 inches. A storm Monday night and Tuesday morning delivered 2.59 inches. A storm early morning Wednesday brought 0.8 inches. Add all three and it means 4.98 have fallen on the city in a short spell.

Rain continued to fall this morning and was expected to taper off by noon. However, another round of thunderstorms is in line to arrive around 5 p.m. today and end by 1 a.m. Friday.

West Main Street between Garfield Avenue and Newton Avenue in Albert Lea is closed due to flooding.

The street is also U.S. Highway 65. The street closed at 3:20 p.m. Wednesday. Traffic is detoured to Newton Avenue, Front Street and Garfield Avenue then back to Highway 65. Detour signs are in place.

West Main will remain closed until further notice. Albert Lea city officials expect the road to be closed for the next few days. Water levels continue to rise over the highway in that area, which is between Fountain and Albert Lea lakes.

City officials closed Lakeview Boulevard near Lakeview Park around 5 a.m. Wednesday due to Edgewater Bay rising over the roadway. Motorists have been taking Willamor Road, Crescent Drive and Martin Road to get around the detour.

When a road is closed it is illegal to travel in that area. Motorists can be fined up to $1,000 and/or sentenced to 90 days in jail.

Power went out this morning for 1,380 customers of Alliant Energy when a bolt of lightning struck a power pole on the west side of the city. The pole held transmission and distribution lines, a spokesman said, and the bolt managed to hit a lower distribution line and avoid the higher transmission lines. Many businesses operated on half power until the line was repaired around 9:10 a.m.

City officials have urged city residents to limit water usage however possible as the city’s sanitary sewer system is experiencing high flows due to the persistent rain this week, according to a news release.

Residents are also urged to make sure sump pumps are pumping outdoors.  It is against city ordinance to run sump pump discharges to your floor drains or the sewer during this time of year.

The Albert Lea Utilities Department has encountered loss of power at several lift stations around town. Generators and mobile pumps have been deployed and city staff is doing everything possible to keep the system from backing up further.

Soft ground and high winds topple trees. Trees and limbs are down throughout much of the city.

Albert Lea will accept brush and tree debris from city residents free of charge during normal operating hours at the transfer station on Richway Drive beginning on Wednesday and ending June 28. There will be no brush or other waste collected at any other site.

A no-wake order remains in effect on Fountain Lake, including Edgewater Bay. Anyone going on the waters of Fountain Lake ought to use extra caution because of submerged or partially submerged tree branches and docks that may have broken free during high winds and rising water levels.

Water is high at Bancroft Bay Park, too, with six of the holes at Oak Island Disc Golf Course unplayable. The north end of the island is divided from the rest with water covering the low point on Hole 13.

Standing water covers many yards and parks throughout Albert Lea, and streets are filled with puddles in many places.

Farm fields have flooded spots, too. As the water makes its way through the soil and into waterways, lakes and rivers are expected to rise. There is a 30 percent chance of a thunderstorm Saturday in Freeborn County, according to the National Weather Service.

The National Weather Service reported around 5 inches of rain overnight in the Mankato area, which overwhelmed the city’s storm sewer system. Outside of Mankato, the Minnesota Department of Transportation reopened U.S. Highway 169 around 5:30 a.m. after a two-hour closure due to flash flooding. Also, Minnesota Highway 66 was blocked by mudslides between Mankato and Rapidan.

“There’s major flooding in the Rapidan area,” said area resident Jean Lundquist, who detoured through the town to get to work. “There are whole fields under water. Houses in town that are sitting in water. Cars parked in driveways sitting in water up to the bottom of the car. Streets have been flooded over.”

The storms have soaked farm fields in southern Minnesota with nearly a foot of precipitation in some places and pelted them with hail, raising concerns about potential crop damage. More rain, hail and wind are forecast through this coming weekend.

“When you get these continuous rains, most of the fields are totally saturated,” MinnStar Bank farm management analyst Kent Thiesse said.

Rock County farmer Lyle Rollag said deluges through Monday put about 25 acres of his corn and soybeans under water and nearly cost him some cattle when a creek running through his pasture overflowed. But the current washed out the fence that penned them in, allowing some 64 cows and calves to swim to safety.

There may be hope for some flooded fields, as University of Minnesota Extension agronomist Jeff Coulter said it all depends how fast the water recedes.

“If that water is able to recede within a day or two, the corn should start to regrow within about three to five days, we should see some new leaves coming out of the plant,” he said. But if the water stays around longer, corn plants will die, he said.

For Rollag, the storms also delivered a large dose of irony: A month ago, his land in the southwest corner of the state had drought conditions.

“We couldn’t seem to buy a rain and now we can’t seem to shut it off,” he said. 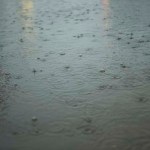 Ripples form in standing water as it continues to rain in Albert Lea this morning. – Colleen Harrison/Albert Lea Tribune 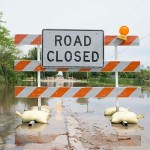 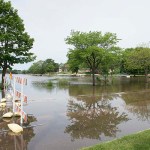 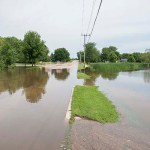 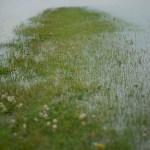 The grass median on Main Street is almost completely submerged as it continues to rain this morning in Albert Lea. – Colleen Harrison/Albert Lea Tribune 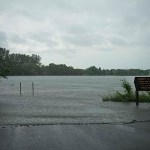 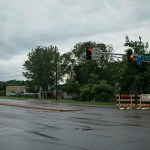 Main Street was closed to through traffic this morning starting at Garfield Avenue due to flooding. – Colleen Harrison/Albert Lea Tribune 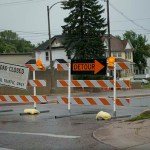 Main Street was closed to through traffic this morning starting at Newton Avenue due to flooding. – Colleen Harrison/Albert Lea Tribune 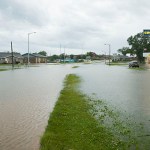