Hollandale church has a double-duty pastor 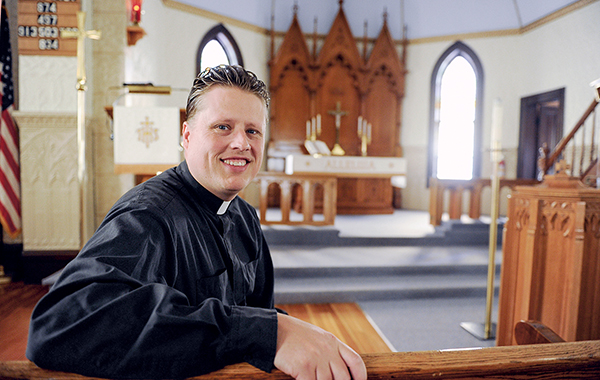 HOLLANDALE — For most pastors, Sunday can be the busiest day of the week. That’s no exception for Jesse Krusemark, the new pastor at Trinity Evangelical Church and St. Paul’s Lutheran Church.

More than a month in, Krusemark is still getting used to his busy schedule.

“Sunday is busy and tiring,” he said. “I’m still figuring that out.”

Born and raised in Pittsfield, Ill., Krusemark said his family was “very faithful in attending church.” Unlike some pastors, Krusemark did not grow up wanting to go into ministry. His pastor introduced the idea to him while he was completing confirmation at St. Paul Lutheran Church in his hometown. However, he wasn’t sure that’s what he wanted to do.

“At such a young age, it seems like a pretty awesome responsibility, but it was more than I could process at the time,” Krusemark said.

Instead, Krusemark decided to attend Luther College in Decorah, Iowa, to study music theory and eventually went to the University of Illinois to complete his graduate work. During this time, however, he discovered his gift of communication while working as a teaching assistant. The job helped him gain confidence speaking in front of crowds, and he continued to be a regular at church services throughout college.

“I was a faithful Christian,” he said. “[Becoming a pastor] was always in the back of my mind.”

After graduate school, Krusemark decided to continue his education with four years of seminary at Concordia Theological Seminary in Indiana. As part of the curriculum, he spent his third year as an intern at Peace Lutheran Church in Faribault, where he met his future wife, Elizabeth.

Krusemark chose to come back to Minnesota after receiving his Master of Divinity, mainly because his wife’s family lives in the state.

“We were looking to be in Minnesota,” he said. “I like that we always have a winter here.”

His first call brought him to Grace Lutheran Church in Stockton, where he was a pastor for seven years. Although he enjoyed his time there, Krusemark decided he was ready for a change.

“I was looking for some new challenges and opportunities,” he said.

Between the parishes in Hollandale and Waltham, Krusemark serves about 220 people. Though he doesn’t have any long term plans, he has a similar goal for all congregations he serves.

“My desire for every congregation is that the word of God will dwell with them richly and they make use of the sacraments,” he said.

Though busy, Sundays include some of Krusemark’s favorite parts of his job.

“I really like Sunday mornings, conducting the service, and bringing the gifts of God to the people,” he said.

Even with his busy schedule, Krusemark still finds time for the other activities he enjoys, like gardening, cooking and spending time with his wife and two children, Jude and Ian.