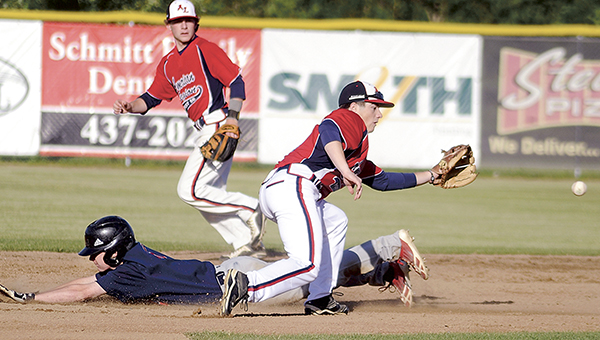 A year after joining forces, Albert Lea Legion Post 56 and Austin Post 91 began the season in the same park but different dugouts.

Albert Lea led 3-1 in the top of the fourth, but Austin rallied with six runs in the fifth to win 8-3 Thursday at Austin.

“Ten straight balls got us in trouble,” said Albert Lea coach Jay Enderson. “We’re shaking off the rust. Summer ball can be good, but you’ve got to be focused. It’ll get better.”

Chris Enderson led Post 56 from the mound for the first 5 1/3 innings. He retired three batters and allowed four walks and seven hits. Tristin Muilenburg entered the game in relief with one out in the sixth inning, and he retired one batter and allowed three hits and two runs.

Parker Mullenbach led Albert Lea at the plate with two hits, an RBI and a run scored. Kole Smith added a hit and an RBI.

Next, Albert Lea (0-1 overall) will play a doubleheader at 5 p.m. Tuesday against Owatonna at Dartts Park.