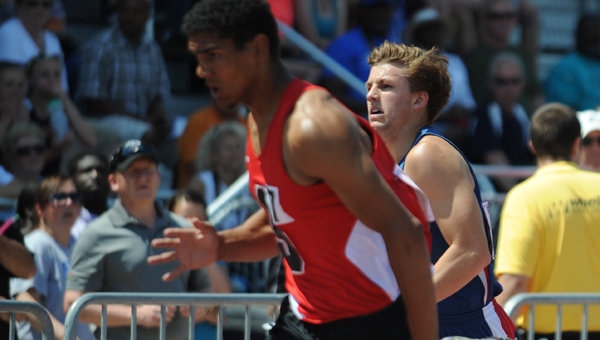 He avoided a fallen runner on the home stretch to take 13th place in the 300-meter hurdles with a time of 41.48 seconds Friday at the Class AA state track meet at Hamline University.

“When the guy fell in my lane, that was tricky,” Smith said. “It wasn’t my best race, but the experience has been great.”

“I’m glad we came up last night,” Gentz said. “He got a feel for the track and made it more of an experience.”

That was opposed to running a 40-second race and going home.

The best part of the race for Smith was heading out of the blocks.

“The first little sprint went well, but after the first hurdle it fell apart,” Smith said.

He was forced to alternate the lead leg that goes over the hurdle first, and his steps were off.

Smith’s seed time and personal best was 40.39 seconds, a mark he set at the Section 1AA meet June 1 at Lakeville South High School.

“Preston is someone I’ve been able to work with from the beginning,” he said. “I have a vested interest in him, and he’s been in my class and been a leader for us and a big part of our school.”

The top four runners ran personal-best times, but the rest of the field was unable to pass their seed times. All three of the hurdlers Smith beat had sub-40-second seed times.

“He finished 10th at sections last year, and here he is 13th at state,” he said. “That’s quite an improvement.”

Gentz was proud of Smith’s performance.

“You want him to go up on that medal stand, but that’s OK,” he said. “I just wanted him to go out and give it his best, and he did.”

Click HERE to view a gallery of photos from Day 1 of the state meet.