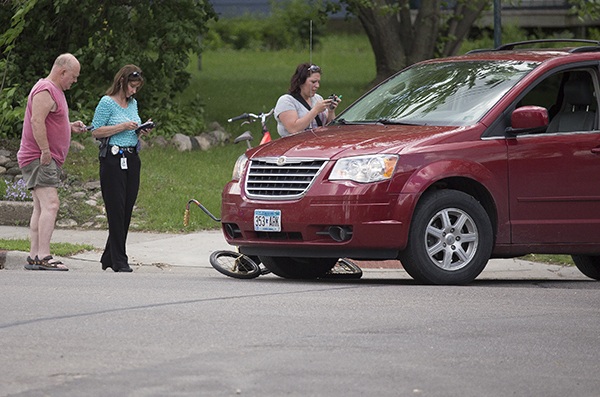 A red minivan and a young bicyclist collided at the intersection of Lincoln Avenue and West Front Street in Albert Lea around 1 p.m. Monday afternoon. – Colleen Harrison/Albert Lea Tribune

A 19-year-old man was transported to Mayo Clinic Health System in Albert Lea Monday afternoon after he reportedly ran his bicycle into a minivan near the intersection of Front Street and Lincoln Avenue.

Bailey Ehren Mitchell was riding westbound on Front Street in the south bike lane, against traffic, when he ran into the side of a red Chrysler Town & Country minivan northbound on Lincoln preparing to turn onto Front Street according to Albert Lea police.

The van’s driver was listed as John Michael Lang, 69.

Police stated Mitchell was treated at the hospital. After he was released from the hospital, Albert Lea police arrested him on a warrant related to an alleged forged check.