Dale Russell Johnson, 78, died Wednesday, June 4, 2014, at his farm in Newry Township, Freeborn County. Dale was born Dec. 13, 1935, to Joel and Olga (Christianson) Johnson in Freeborn County where he lived his entire life. He was a lifelong member of Red Oak Grove Lutheran Church. 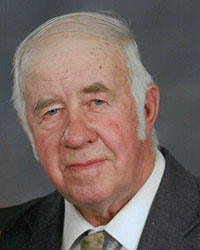 Dale married Karen Olsen on May 21, 1960, at First Methodist Church in Albert Lea. Dale and Karen farmed their entire married life. They developed the Kar-Dale Holstein herd of registered Holsteins. When Dale’s health prevented him from working with the Holsteins, he went into restoring and collecting toy tractors and pedal tractors. He enjoyed all the people he met at these different events. Dale will be remembered for the love he had for his family and friends, but his love for his savior, Jesus Christ, gave Dale the peace that only he can give.

Funeral services were Sunday at Red Oak Grove Lutheran Church with the Rev. Lindsay Stolen officiating. Visitation was Saturday at Worlein Funeral Home in Austin, and one hour prior to the service at the church on Sunday. Memorials in Dale’s memory can be directed to the family or to a recipient of the donor’s choice. Worlein Funeral Home of Austin is assisting the family with arrangements. Condolences may be expressed to the family online at www.worlein.com.