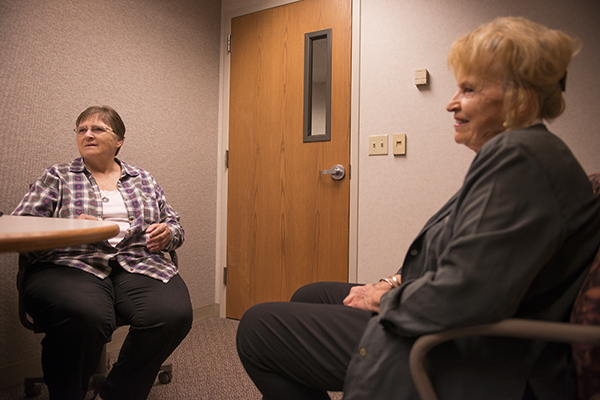 Julie Latusek, left, and Joan Stiles met this past spring when they were going to Mayo Clinic Health System in Albert Lea to seek treatment for breast cancer. The two quickly became good friends, and are now both cancer-free. – Colleen Harrison/Albert Lea Tribune

There are just some things that make a friendship stronger. For two Albert Lea-area women, that thing was defeating cancer.

Julie Latusek and Joan Stiles are both survivors of breast cancer. They met at the Cancer Center at Mayo Clinic Health System in Albert Lea while they were both in radiation treatments.

They never really talked until Latusek finished her radiation at the beginning of April. After she completed her last treatment, Stiles had shown up with flowers.

Latusek said it was a “lovely thing to do for a complete stranger.” She wanted to return the sentiment.

Two weeks later, on April 18, Stiles completed her own radiation. Latusek made an appointment for that day to give her a reason to go to the hospital and brought Stiles flowers just as she had done for her.

The two have been friends since and have been trying to get together to talk more. From the way Latusek and Stiles acted, it seemed like they had been friends for a few years rather than a few months.

In fact, Latusek had wanted to meet up with Stiles the day of their interview with the Tribune, but Stiles said she was busy. Little did they know that they would actually be meeting.

“She stood me up today!” Latusek joked with a laugh.

Latusek was born and raised in Albert Lea. She moved to Wells after getting married and had two children, a son and a daughter. She has five grandchildren, three of which are in a university.

She still lives in Wells and likes computer games, crocheting, baking, gardening and spending time with her neighbors.

Stiles was born at Naeve Hospital and was raised in Albert Lea. She graduated from the Naeve Hospital School of Nursing. Desiring adventure, she moved to Colorado Springs, Colo., with a friend. She spent most of her life there.

She has also lived in southern California, northern California, Arizona and North Dakota. After retiring, she moved to Spokane, Wash., because both of her sons lived there. She also has one 10-year-old grandson.

One of her sons ended up moving to Mankato, and since Stiles has other family and friends in the area, she moved back to Minnesota last July.

Latusek said that her friendship with Stiles is different than any relationship she has. Having a friend who has a deeper understanding of what’s going on is like nothing else.

“It’s a special thing that we have,” Latusek said.

Latusek’s own sister had breast cancer, and while she was taking care of her she never once thought that she would get cancer herself. Stiles shared the same sentiment — cancer was something she never expected.

“A nurse has a heart for people,” Stiles said. She said she was used to being the caregiver, never the patient.

Stiles and Latusek both praised the Cancer Center. Latusek said it’s not all “doom and gloom” and Stiles said she felt like she mattered.

Breast cancer is a significant disease and is one of the top two cancers for women, along with lung cancer, Kozelsky said. Self-examination is key as patients usually find abnormalities before their providers.

Nothing can really protect against breast cancer, but family history can make the cancer more likely. If someone in your family has had breast cancer under the age of 50, it is a significant risk.

Men can also get breast cancer, even though it is just 1 percent of all breast cancer cases. Kozelsky said that if you have a family history of breast cancer or feel an abnormality, contact your primary care provider as a first step.

If caught in the early stages, like Stiles’s and Latusek’s cancer, the long-term survival rate is high.

“Our story is little, but it’s a beginning,” Stiles said.

Now that both of the women have beaten cancer together, that story can go on for a long time.