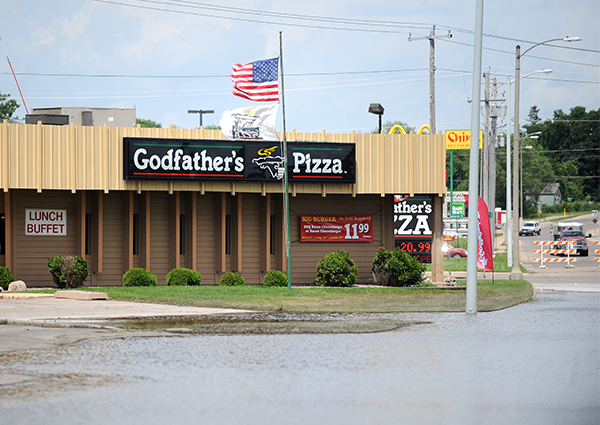 Godfather’s Pizza is open Thursday despite flooding in the section of main street in front of it. — Jacob Tellers/Albert Lea Tribune

Since the 7-inch downpour last week, the stretch of East Main Street from Garfield Avenue to Newton Avenue has been closed to through traffic due to flooding.

The closing has been a nuisance for drivers, with Bridge Avenue and Clark Street clogging up, and stores and restaurants near the flooded area have had a reduction in customers.

The Minnesota Department of Transportation closed East Main on June 18 after waters rose following a storm that delivered 3 inches. Sections of the road remain closed Saturday as the water has been slow to recede, despite the lack of rain in the past week. 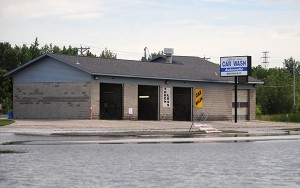 Albert Lea Car Wash is another business that was heavily affected by the flooding on Main Street. — Jacob Tellers/Albert Lea Tribune

Godfather’s Pizza has been hit hardest by the flooding. It was forced to shut down for four days last weekend as water surrounded the restaurant and filled its parking lot.

“Water never came in the store,” she said. “We were able to sandbag in the back, and water never came up high enough to go into the building. I was here every morning at 7 o’clock checking on it.”

Merten said that health and flood insurance inspectors stopped by, but there were no problems to report.

“We were just shut down because we couldn’t get into our parking lot,” Merten said.

Godfather’s opened again Tuesday, but she noted the restaurant had seen less than half the normal amount of revenue during the first two days after it reopened.

“You can’t see our open sign since you can’t come down Main Street,” Merten said.

Employees were hurt by the closing as they missed out on work hours.

“All my employees were off all of those days,” Merten said. “They missed out on all their work. They have families and that really hurt them too. One driver really lives on all of his tips through the week, and he didn’t have any of his tips for the whole weekend, and that’s a big chunk.”

Merten said that Godfather’s was reaching out to the community to let people know that they are open, with announcements on their Albert Lea Facebook page as well as radio ads.

According to Merten, in her seven years of working at the Albert Lea Godfather’s, the restaurant never has been forced to close due to flooding. In flooding during previous years, customers had to sometimes park in the Hanson Tire lot adjacent to Godfather’s, but the store had always remained open.

Because the section of Main Street in front of Godfathers remains closed, customers can only access the store from East Clark Street.

Several other business leaders along Main Street, at Subway, Cars-N-Credit and Fleet Farm Supply, said that while business has slowed some, there wasn’t a significant loss of revenue.

Subway manager Sharon O’Byrne estimated that sales were down 10 to 15 percent at the Main Street location.

Cars-N-Credit manager Kenny Dreyling described the past week as a “lull.”

According to MnDOT spokesman Mike Dougherty, the state agency is still monitoring the section of East Main Street that is closed. The route also is U.S. Highway 65.

Dougherty said that the road could be open as soon as this weekend, depending on how fast the water drains and if there is additional rain.

Albert Lea City Engineer Steven Jahnke said Main Street flooding is due to the Fountain Lake waters rising above portions of the road. Because low-lying sections of Main Street are now below the water table, the water is unable to drain away.

According to Jahnke, the only immediate solution is to wait for the water to recede.

“The only fix is to basically reconstruct that road at a higher elevation,” Jahnke said. “That’s something MnDOT would have to do.”

The water has taken longer to recede this year because of the nature of last week’s rainstorms.

“Usually we get one big rain storm,” Janke said. “The fact that it was split up over three days saturated everything more. The Shell Rock River down in the south end, that’s where Albert Lea Lake drains to, that was completely full and it wasn’t letting the water out. Usually the Shell Rock drains faster.”

Jahnke said he would likely be asking Albert Lea City Council to submit a formal request asking MnDOT to conduct a feasibility report on how much it would cost to raise portions of Main Street. City leaders last week requested city staff to look into the issue.