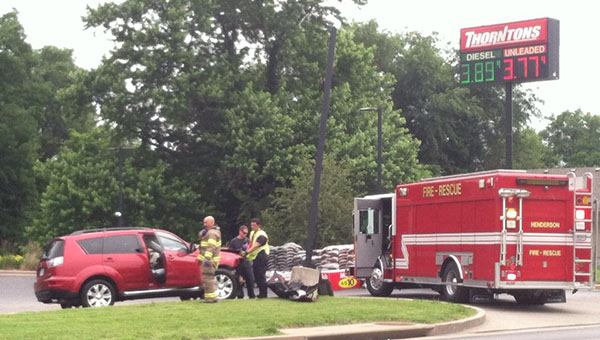 A Freeborn woman was injured after this crash Wednesday morning in Henderson, Ky. She was transported to a hospital in Evansville, Ind. — Photo courtesy Henderson Police Department

A Freeborn woman standing in the parking lot of a gas station in Henderson, Ky., was injured Wednesday morning after a sport utility vehicle jumped a curb and struck her, sending her into a parked semitrailer.

Leah Irwin, 20, was with family members on a trip to Nashville when they stopped at a Thorntons gas station, 2855 U.S. 41 N., said Barbara Crumb, Irwin’s grandmother.

The Henderson Police Department said Phyllis A. Rosenbury, 76, of Henderson was driving a Mitsubishi Outlander northbound on U.S. 41 when a northbound Cadillac XTS, driven by Sharon Vanvant, 77, of Henderson, struck the side of Rosenbury’s vehicle.

Rosenbury then crossed both turn lanes, both southbound lanes and then jumped the curb in front of the gas station. Her SUV then struck Irwin and a vehicle she was standing next to. Irwin was sent through the air about 25 to 30 feet before she hit the front of a semi, according to police.

Rosenbury continued across the parking lot before her vehicle struck the concrete base to a light pole.

The Police Department stated Irwin was transported by ambulance to St. Mary’s Medical Center in Evansville, Ind. She was listed in fair condition as of this morning, according to a hospital spokesman.

Crumb said Irwin remains in the intensive care unit of the hospital. She suffered injuries including a fractured pelvis, knee and elbow. She also had some facial scrapes.

She credited another family member who offered medical help to her granddaughter before emergency medical technicians arrived.

Irwin is the daughter of Tricia Bartz and Lonnie Irwin, of Freeborn.

Crumb said people who wish to contact her granddaughter can send letters to 3700 Washington Ave., Evansville IN 47714.