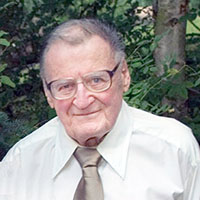 Glen grew up in Myrtle, went to elementary school there and graduated from Albert Lea High School in 1940. Shortly thereafter he entered the U.S. Army and served during World War II across Europe in the 3187th Army Signal Battalion. Glen went to the Pacific Northwest following the war, and he earned his degree from Eastern Washington State College in Cheney, Wash. On November 27, 1951, he was united in marriage to Jean Kinney in Spokane, Wash., and went on for several years to manage sales districts for the Americana Corporation and Encyclopedia Britannica in the Pacific Northwest and the Midwest. He and his family settled in Seattle’s Green Lake neighborhood in 1965 where he remained for rest of his life. He always mentioned what a nice location it was with swimming nearby. In the late 1960s, he transitioned to a new career appraising real estate for the King County, Washington Assessor’s Office. In retirement Glen and his wife traveled extensively, both domestically and internationally.

Glen was a member of the VFW, a brother at the Green Lake Masonic Lodge and served for years as an officer on the Green Lake Community Council. Glen truly enjoyed meeting people in any setting and developed many, many friends and acquaintances everywhere he went. He will be missed by all.

There will be a memorial service for Glen on 2 p.m. June 28 in the chapel at Evergreen-Washelli cemetery in Seattle. To sign the guest book, please go to www.washelli.com/obits.

Family requests remembrances may be made to the Alzheimer’s Association — Western and Central Washington State (www.alz.org), in lieu of flowers.