Funeral services for James E. Murtaugh, 86, of Albert Lea will be at 11 a.m. Friday at United Methodist Church. The Rev. Tom Biatek will officiate. Interment will be in Graceland Cemetery. Military honors will be accorded by members of the American Legion and VFW Honor Guard. Visitation will be from 4 to 7 p.m. Thursday at Bayview/Freeborn Funeral Home and one hour prior to the service at the church on Friday. Online condolences are welcome at www.bayviewfuneral.com. 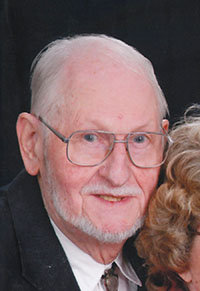 James Edwin Murtaugh was born in Albert Lea on June 14, 1928, the son of Michael and Erna (Tank) Murtaugh. He graduated from Albert Lea High School in 1946 and served in the U.S. Army from 1946 to 1948. He then attended the Dunwoody Institute in Minneapolis from 1949 to 1950 in the power program. He was recalled by the Army to serve in Korea in 1950 to 1951. Following this he returned to Dunwoody to complete his studies. In 1953 he was employed by Wilson & Co. as a steam engineer in the power plant for over thirty years. On June 18, 1960, Jim was united in marriage to Margie Springborg in Albert Lea. Jim was a former member of Christ Episcopal Church and a member of United Methodist Church. He was also a member of the American Legion, the Elks Lodge, the Eagles Lodge and a former member of the Masonic Lodge, Apollo Commandery. Jim loved working on a steam-powered automobile, which he himself custom built. He was a devoted reader and was well known for his excellent memory for details. In his retirement Jim took dancing classes and loved to go dancing with his wife, Margie. They danced for several years on the Eagles Cancer Telethon in Rochester. Jim was very interested in following current news events and politics, especially on his iPad. He enjoyed working on maintaining his yard and home. He enjoyed watching Turner Classic Movies from the ’20s, ’30s, ’40s and forward. Blessed be his memory.

Jim was preceded in death by his parents, Michael and Erna Murtaugh; daughter-in-law, Geri Murtaugh, and brother, Leonard Murtaugh.

Memorials in Jim’s memory can be made to the Freeborn County Humane Society, United Methodist Church or donor’s choice.