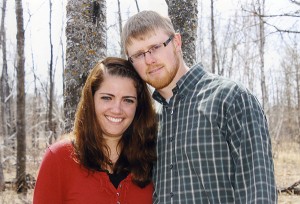 Britta is the daughter of John and Lynn Kadrlik of Baldwin, Wis., and Jason is the son of Roger and Shari Manges of Blooming Prairie.

The couple will be married at 2 p.m. June 28, 2014, at St. Mary’s Catholic Church in Hammond, Wis. A reception will be at the Hudson Grand Hotel in Hudson, Wis.

The bride is a 2010 graduate of Baldwin-Woodville High School. She graduated in May 2014 from the University of Wisconsin-River Falls with a degree in exercise and sports science.

The groom is a 2009 graduate of Blooming Prairie High School. He graduated from South Central College, Mankato in 2011 with a degree in computer integrated machining.