Memorial services for Marilynn Pauline Nelson will be at 2 p.m. June 29 at Bayview/Freeborn Funeral Home. The Rev. Clayton Balsley will officiate. Interment will be at Clarks Grove Cemetery. Visitation will be one hour prior to the service at the funeral home. Online condolences are welcome at www.bayviewfuneral.com. 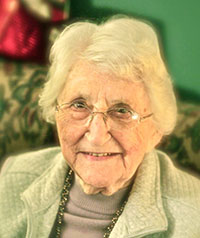 Marilynn Pauline Nelson was born on June 25, 1922, to Justin and Thora (Haug) Sunde at their home near New Richland. She was baptized, confirmed and married at Le Sueur River Lutheran Church where she was an active member. Marilynn graduated from New Richland high school in 1940 and worked at the E.F. Johnson Co. in Waseca.  She married Harold Nelson of Clarks Grove on July 5, 1942, in the Le Sueur River Lutheran Church. They farmed near Clarks Grove for 42 years and raised six sons.  Marilynn was employed in the Clarks Grove post office for 23 years, from 1961 to 1984, and also worked part time in the Albert Lea Post Office. They moved to Albert Lea in 1984 due to Harold’s failing health.

Marilynn loved the outdoors, especially her flowers and birds. She loved nature and had flower gardens wherever she lived and fed birds, which was the most entertaining part of her day. They were both avid sports fans as their sons participated in many sports and they traveled to many games. She belonged to bridge clubs and enjoyed any card games as well as traveling to Norway to meet relatives.

Marilynn was preceded in death by her parents; husband; grandson, Blake Nelson, and brother, Luverne Sunde.