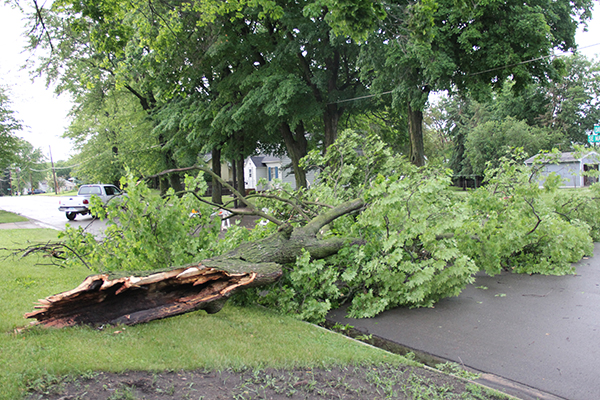 A white pickup turns around after seeing a downed tree in the intersection of S.E. Marshall Street and David Avenue this morning after severe storms passed through the area Monday night. – Sarah Stultz/Albert Lea Tribune

Despite the wind, hail, lightning and rain a severe thunderstorm brought to the Albert Lea area Monday, there were scant reports of damage other than downed trees, fallen limbs and scattered leaves.

The usual spots in Albert Lea flooded Monday — East Main Street near Morin Park, West Main Street near Godfather’s Pizza, Lakeview Boulevard near Lakeview Park — but the high water subsided by this morning. A flash flood warning was in effect until 9 a.m. today. The ground pretty much through the region is soaked.

The Albert Lea wastewater plant tallied 2.79 inches of rain Monday. Areas near Hartland and Geneva were above 4 inches.

The strongest part of the storm hit Albert Lea between 6:30 and 7 p.m. Pea-sized hail fell. The wind speed at 6:53 p.m. was recorded at 38 mph with 51 mph gusts. A severe thunderstorm warning expired at 7 p.m. The same warning for eastern Freeborn County expired at 7:30 p.m.

The Freeborn County Sheriff’s Office received multiple reports of downed trees and power lines at 7:45 p.m. Monday in Maple Island. Some trees were even reportedly on houses and other structures. No injuries were reported.

Steady rain continued after the turbulent front moved through. Even by 9 p.m., the wind speed in Albert Lea was still at 30 mph. The wind let up before 10 p.m. but the rain didn’t halt until after 3 a.m.

The storm continued to the east. A tornado warning was in effect for Brownsdale after radar indicated a tornado might be possible, but no funnel cloud was sighted.

In Iowa, at least seven tornadoes were reported Monday evening: Plover, Goodell, Laurens, West Bend, Clear Lake, Mason City and Tripoli. There have been reports of injuries as of this morning. Tornado warnings were issued regularly from Sioux City to Spencer to Algona to Mason City.

All the residents of the town of Pilger — some 350 people — evacuated their homes, many leaving for shelters in nearby towns, after the powerful twisters slammed the area Monday afternoon. Nebraska State Patrol closed all roads into town.

“More than half of the town is gone — absolutely gone,” Stanton County Commissioner Jerry Weatherholt said. “The co-op is gone, the grain bins are gone, and it looks like almost every house in town has some damage. It’s a complete mess.”

Emergency crews and residents spent the evening sifting through demolished homes and businesses in the town about 80 miles northwest of Omaha.

Stanton County Sheriff Mike Unger estimated that 50 to 75 percent of Pilger was heavily damaged or destroyed in the storm. The local school is likely beyond repair, he said.

Weekend storms dumped as much as 4 inches of rain at Luverne in the southwest corner of Minnesota and over 5 inches in some areas near International Falls on the state’s northern border, and they packed wind gusts as high as 68 mph at Minneapolis-St. Paul International Airport.

Severe thunderstorms popped up again in southwestern Minnesota on Monday afternoon, and the National Weather Service said areas to the north were at risk as well, including the Twin Cities area. Additional waves of showers and thunderstorms were forecast through Friday.

Pipestone County reported 3.5 inches of rain Monday, the weather service said. A wind gust measuring 79 mph was reported in Jackson, while hail estimated at an inch in diameter fell near Jackson and tree branches were knocked down.

Authorities activated the State Emergency Operations Center to help affected residents respond to the damage. The announcement said it was just a partial activation that requires officials from various agencies to determine whether state resources are needed for the recovery effort. No local officials have requested state resources so far, it said.

The state Homeland Security and Emergency Management Division said local officials were assessing damage to 12 township and county roads in Rock County. Six inches of rain fell over the weekend in Pipestone County, flooding roads in 75 locations in the Edgerton area and washing out the road to a bridge on the Rock-Pipestone County line, it said.

Sandbagging continued Monday in the International Falls area to build up dikes protecting homes, businesses and the city’s water treatment and wastewater treatment facilities from rising waters on Rainy Lake and the Rainy River. U.S. Rep. Rick Nolan, who represents the area, canceled two appearances on his schedule so he could travel to International Falls and meet with local officials and volunteers. Residents had filled 50,000 sandbags as of Sunday.

“It was 4 inches from the top of what they had bagged and they’re expecting it to rise at least a foot yet by the time all the runoff is done,” said Koochiching County sheriff’s dispatcher Rich Rud.

The high water has left many residents’ docks under water, as well as all docks and some boat launches at Voyageurs National Park. The park remained open Monday, but 24 campsites have been closed. Rud said no damage assessments have been done yet. Highway 11 west of International Falls remains closed due to flooding.

Heavy rains over the weekend aggravated lake and river levels that were already swollen with spring snowmelt. Koochiching County Sheriff Brian Jespersen said the National Weather Service reported over 2.5 inches of rain fell in the area, but he said some residents had gauges registering over 5 inches.

Sandbagging also continued Monday as the water level crept up on nearby Lake Kabetogama, another major lake that’s part of Voyageurs. It flows into Namakan Lake before reaching Rainy Lake. Steven Steblay, director of homeland security and emergency management for the St. Louis County Sheriff’s Office, said crews were working to protect homes, resorts and roads.

The Associated Press contributed to this story. 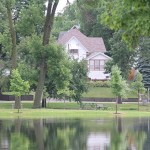 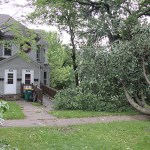 A fallen tree blocks the driveway to The Cottage behind 524 and 526 Park Ave. this morning. High winds and heavy rains caused branches to fall from many trees across the area. – Sarah Stultz/Albert Lea Tribune 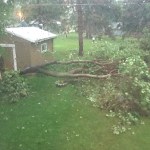 Dawn Schroeder sent the Tribune this photo of a downed tree in her backyard on Grand Avenue in Albert Lea. – Provided 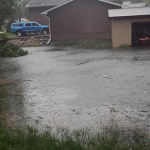 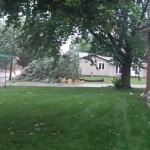 A tree fell at the corner of Portland Avenue and East Richway Drive. This image was sent to the Tribune by Jodi Dreyling. – Provided 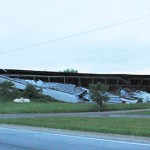 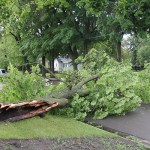 A white pickup turns around after seeing a downed tree in the intersection of S.E. Marshall Street and David Avenue this morning after severe storms passed through the area Monday night. – Sarah Stultz/Albert Lea Tribune