Boats are on the lake, and this summer looks to be filled with activities. Many are described in Summer Times inside today’s newspaper, but here are additional aspects that are good to know as people make their summer plans. 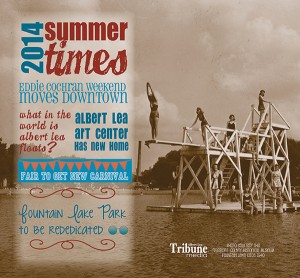 Drag racing is back

The Upper Midwest Power Boat Association will be drag racing boats for the third year in a row in Albert Lea this summer.

Different boat classes ranging from speeds of 65 to 85 mph will be racing each other during the event. UMPBA will have its Albert Lea races starting at 1 p.m. Sept. 20 on Edgewater Bay.

Spectators can watch from the pavilion area. There’s no cost to watch the event, and food and other concessions will be for sale.

• In a small boat resist the urge to stand up. If you must move around, keep your weight low and close to the center of the craft.

• Collisions with a second boat or another object don’t just happen. They are usually the result of inattention, fatigue and a lack of knowledge about local water conditions.

• There is no speed limit but travel slower in lakes with debris in water, docks and other boats.

• Waterskiers must be off the lake one hour after sunset.

• Personal watercraft must be off the lake one hour after sunset.

• All boats, including canoes and kayaks, must have one lifejacket on board per passenger. State law requires children under 10 years old wear a life jacket on board all boats.

• Boats longer than 16-feet must have throw cushions on board.

• Boats must have a fire extinguisher on board.

• All boats, including personal watercraft, canoes and kayaks, must have current registration. Registration is good for three years.

• At sunset, boats must have red and green lights on in front and a white light with 360 degrees of visibility on in the back.

• Navigation lights must be on from sunset to sunrise.

• It is not the law, but as a rule of thumb, boats should travel counter-clockwise around lakes.

• If you see a buoy out of place or any other hazard to navigation on any lake in Freeborn County, report it to the Freeborn County Sheriff’s Office at 377-5205 or send an email to the water patrol at  waterpatrol@albertlealakes.com.

• Use AlbertLeaLakes.com as a helpful resource.

This lake has 24 miles of shoreline and its deepest spot is six feet. It has a few accesses. One is at Frank Hall Park in Albert Lea and features a pier and a boat lunch. Another with a dock and a boat launch is at a place along South Shore Drive called St. Nicholas, a former town. A third fishing spot is at the bridge over the Shell Rock River on the south shore. The lake has gained a reputation for walleye and even has been featured on a TV fishing show. The lake is full of bass, crappie, sunfish and channel cats.

This lake in Clear Lake, Iowa, has an average depth of 19 feet. A dredging in 2009 has improved the general health of the lake. Walleye, yellow bass, channel catfish and bullhead can be found in the lake.

Boats can access this lake at Brookside Park or along state Highway 13 on Edgewater Bay. Popular spots along the shore are a fishing pier at Edgewater Park, the bridge by Dane Bay, the Hatch Bridge, the dam on Bridge Avenue and Katherine Island. Catfish are found in deep water near woods, and pan fish can be found throughout the lake. Walleye exist in its deep holes and points.

This lake is fished from Arrowhead Point, a peninsula extending from the east side that almost divides the lake in half, or from the dam on the west side or from a dock at Freeborn. There is boat access at Arrowhead Point County Park. The lake has yellow bass, sunfish and smallmouth bass.

This shallow lake is good to fish in the morning. Many fishermen like to fish near the new dam on the southeast side. It has been stocked in recent years with northern pike and yellow perch. There also are several good fishing spots along Turtle Creek to the east.

This lake was recently stocked with northern pike by the Department of Natural Resources and also has pan fish. Boat access and a county park are on the east shore along U.S. Highway 69.

This lake is near New Richland and has one access point with a beach. It is full of crappie, sunfish, northern and bass.

The Rochester Swing Band will have a concert at the event center this summer. This band features some people who used to live in Albert Lea. The show is 7:30 p.m. at the Lighthouse Event Center. Tickets are $15 advance, $20 at the door.

Ross Kleiner & The Thrill will be in Albert Lea at the end of summer. This Minneapolis-based band, which was formed in 2012, classifies themselves as “hi-test roots rock.” Tickets are $15 in advance, $20 at the door.

Be sure to catch Summer Times in today’s edition of the Albert Lea Tribune.