Think inside the box

More and more winemakers are selling good wines in a box. Technically, the wine is in a bag inside a box. No longer is boxed wine the domain of wine purchased for its quantity. 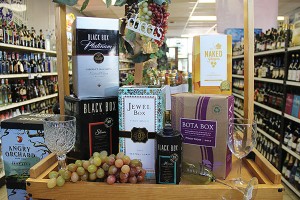 Boxed wine sales have increased an average of 20 percent a year since 2000, according to viniculture magazine The Grapevine.

She said wine vendors tell her to expect at least 20 popular vineyards to introduce new boxed wines within the next year.
Franzia was a pioneer in the boxed wine sector and remains the top selling brand of boxed wine in the United States. But now the high quality wines are entering the market. Bota Box, marketed as being fully biodegradable, in 2012 saw the largest increase in market share for a wine brand — a sign that consumers are open to alternative packaging.

Other boxed wines Cheers sells that get decent marks from wine reviewers are The Naked Grape, Black Box and Jewel Box.

Cheers Liquor owner Angie Stickfort said The Naked Grape sells the exact same stainless-steel-fermented wine in its boxes as it sells in its bottles.

She said the boxed bags dispense wine then close airtight, allowing the wine to last four to six weeks. An open bottle, even with a stopper or a pushed-on cork, isn’t airtight and lasts a couple of days before the taste changes.

“That is one of the huge plusses for a boxed wine,” Stickfort said. “The last glass tastes the same as the first glass.”

Heinrich said the boxes are handy for no-glass-allowed campsites and beaches, and they fit into refrigerators more easily than bottles. What’s more, it avoids the expense of a cork.