Bulldogs are 1 win from state 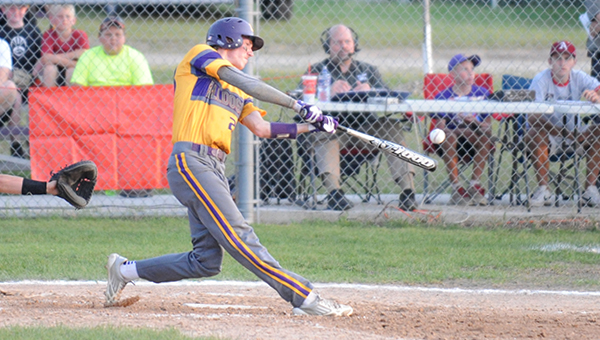 Taylor Throne of Lake Mills drives in his second home run of the day off of a 3-2 count in the fifth inning against Riceville in the Class 1A, District 4 seminals at Lake Mills. — Jacob Tellers/Albert Lea Tribune

LAKE MILLS — Home runs and bunts — types of hits that couldn’t be any more different — propelled the Lake Mills past Riceville.

Taylor Throne’s two solo homers along with a trio of bunts in the third inning pushed the Bulldogs one game closer to the state tournament with an 8-3 victory over the Wildcats Thursday in the Class 1A, District 4 semifinals at Lake Mills. 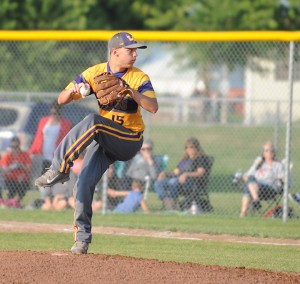 Taylor’s first home run came early in the first inning off of an 0-1 count, as he drove a curveball over the right field fence. Having swung and missed on his first pitch of the day, Taylor wasn’t deterred.

“I know he’s a lefty, and he has a curve. It was hooking away from me, and he just kind of left it inside,” he said. “I just turned on it and happened to get a good swing.”

Facing a 3-2 count in the fifth inning, Taylor crushed a fastball over the Lake Mills scoreboard in right center for his second solo shot of the game. His teammates lined up by home plate to cheer him on as he rounded the bases.

“It was right over the heart of the plate,” Taylor said about the pitch.

Thursday’s pair of home runs raised Taylor’s total to three on the season and five for his high school career. The senior hit two homers his junior year.

“Taylor’s been seeing the ball extremely well the last week or so,” said Lake Mills coach Jason Blaser. “It’s good to see. He’s a kid that when he is swinging the bat well he’s hot.”

According to field markers, the distance from the plate to the outfield fence is 287 feet at right field, 322 at center field and 306 at left field.

Bunts by Mateo Peña, Matt Throne and Peter Hagenson helped the Vikings grind out five runs in the third inning. 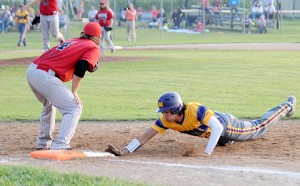 Slade Sifuentes of Lake Mills safely dives back to first base to avoid being picked off in the Class 1A, District 4 semifinals at Lake Mills. — Jacob Tellers/Albert Lea Tribune

Luke Kayser started the inning by advancing to first on a catchers’ error. Lincoln Boehmer singled to left field.

Peña bunted down the first-base line and beat the throw. An error on the toss gave Slade Sifuentes, who was pinch-running for Kayser, and Boehmer time to score, and Peña was able to advance to second.

“We talk all the time about how if you can put pressure on the defense and make them make the plays, a lot of the times we are going to be successful,” Blaser said.

Taylor was walked in his second at-bat.

With runners on first and second, Matt bunted, and a confused Wildcats pitcher couldn’t decide whether to throw to first or third until both runners reached base safely.

With the bases loaded, a botched attempt to pick-off Peña at third allowed each Bulldogs runner to advance.

A sacrifice bunt by Boehmer gave Taylor time to reach home. A groundout to first by Paul Pins sent Matt in for the fifth run of the inning, which gave the Vikings a 6-0 lead.

“We work on bunting a lot in practice,” Blaser. “Not only do we try to sacrifice bunt, we have some guys who can sacrifice bunt extremely well right down the line, so it’s a lot tougher play for the defense.”

The Bulldogs lost to the Knights in the district tournament last year 7-1. Newman Catholic went on to win the Class 1A state championship.

“They’re obviously the better team, Blaser said.” They’re strong one through nine, but any team can win on any given night. We’ve got to have a few bounces our way. We’ve got to continue to do things the way we normally do. We can’t go in there and look afraid.”