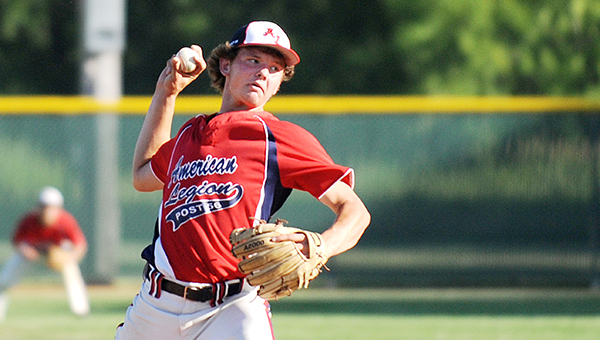 Chris Enderson of the Albert Lea Legion throws a pitch Tuesday in Game 1 of a doubleheader against the Rochester Patriots at Hayek Field. Enderson pitched 6 2/3 innings. He struck out six batters and allowed 10 hits and six walks. He also led Albert Lea at the plate by going 3-for 3 with an RBI and a run scored. — Jacob Tellers/Albert Lea Tribune

After starting the season 1-3, Albert Lea has won seven of its next 10 games.

In Game 1, Albert Lea’s Chris Enderson took the win on the mound. He struck out six batters and allowed 10 hits and six walks in 6 2/3 innings.

Albert Lea built a 5-2 lead in the third inning and extended its advantage to four runs in the fifth. Rochester responded with two runs in the sixth and seventh, but Post 56 was able to hold on for the win.

In Game 2, Tyler Steele led Post 56 from the mound. After giving up three runs in the first inning, he held Rochester scoreless the next five innings before giving up one run in the seventh.

Johnathan Fleek led Albert Lea from the plate in Game 2.

“After being off for 10 days, he was 4-for-7 (through the doubleheader),” said coach Enderson. “He hit two doubles and just missed a home run off the center field fence (in Game 2).”

Next, Albert Lea will host Waseca at 7 p.m. Thursday.