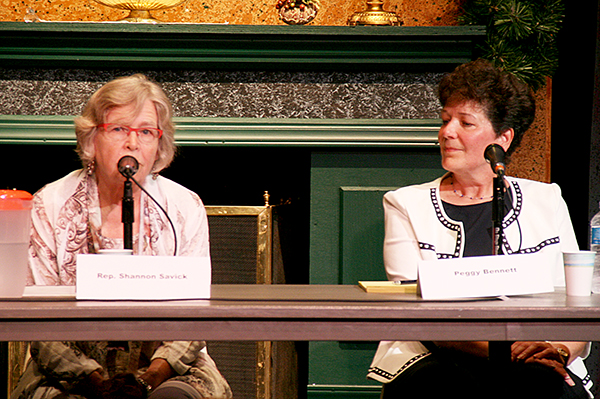 Those were a few of the topics discussed Friday during the first local debate of the year.

Price, who presently works for the state, said his campaign is focused on equality of life and noted that his top priority is senior citizens, though there are other areas that need improvement, such as education, infrastructure and jobs.

‘What our state is doing to our senior citizens is not acceptable,” he said.

He talked about changes he would like to see in education standards, including bullying and secondary education.

He said the state needs to step up to the plate to do so. 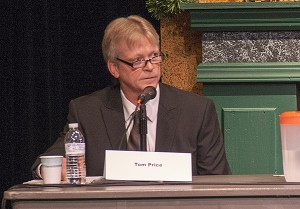 Savick, who was elected two years ago to the position, talked about some of the successes from the last legislative session. She said the DFL majority balanced the budget, paid back the school shift and lowered property taxes.

Retired from the high-tech industry, she said she helped bring back $7.5 million in funding to dredge Fountain Lake.

She said her vision of Minnesota includes having a world-class working force. To achieve that, the state needs to invest in education.

Bennett, a first-grade Sibley Elementary School teacher, said a year ago she never thought she would be running for office but she did so for her “kids,” the more than 750 students she has had over the years.

“I want them to have the America I had the privilege of growing up in,” she said.

She said she thinks government needs to work from the bottom up, not from the top down.

One question asked each of the candidates whether they would have supported funding for the Fountain Lake dredging project. The Legislature approved $7.5 million out of a total $15 million cost for the project this past session.

Price said while he supports the funding for the dredging, he questions whether there are other priorities that should be addressed first in Albert Lea, such as flooding and sewage backups in homes. He questioned whether sewage would have to be dumped back into the lake the next time of heavy rains.

Savick, who voted for the lake restoration project, talked about the work that was done to prepare the lake to be dredged, including filter strips.

“It’s going to be a great asset to Albert Lea once that lake is dredged and is clean again,” Savick said.

Bennett said she, too, would have supported the dredging. She noted, however, that she was upset with Savick “taking full accolades” for the area receiving the money for the project.

“So many people were involved with that, and it was definitely a team effort,” Bennett said. “I think we need to acknowledge that.”

Savick said she has not taken full responsibility for getting the money, but she did point out that the governor did not have the project on his list of projects and that the Senate only had $1 million for it.

The candidates were asked how they would propose to balance the state budget without “smoke and mirrors.”

Savick said the only new tax the Legislature approved this year was raising taxes on the top 2 percent of earners in the state.

“People of that income were paying less percentage of tax than we were in the middle class,” she said.

She said the Legislature also closed corporate loopholes and paid back the schools. The state didn’t take any aid away from counties and cities.

She pointed out that Republicans were in charge when the state shifted money from the schools to balance its budget and noted that the governor this year started a program looking at how to make government simpler.

Bennett said the Legislature approved more in new taxes than just for the top earners, talking about new taxes on carpeting and other services.

“We have a lot of taxes that are affecting us everyday, and that has to stop,” Bennett said. “It’s getting ridiculous, and it’s putting Minnesotans in a stranglehold.”

Savick said the other new taxes Bennett referred to were not new.

Bennett said Minnesota is the sixth highest in total taxes, while Iowa, right across the border, is 29th.

Price said he thinks the state is slow, inefficient and costly, stating the state is on “a stampede of spending.”

He said the state needs to make education its highest priority.

All of the candidates said they supported all-day kindergarten and said they disagreed with Common Core state standards. They said what works for one student may not necessarily work for another.

Regarding the Affordable Care Act and the state’s online health exchange, Savick said she plans to introduce a bill to expand the territory for southeastern Minnesota residents. Right now the southeastern area only has one provider, and this is causing the residents here to have some of the highest insurance premiums in the country.

The rest of the state, however, is seeing some of the lowest premiums in the country.

She said 40 percent of the people who are signed up for MNsure were never able to pay or have health insurance before. Now that they have health insurance, she said this will lead to reduced costs at hospitals, which in the long run will reduce the cost of health care.

Bennett said 79 percent of the people who have signed up for MNsure are receiving subsidies for their payments. The other 21 percent are paying their full premiums.

“That’s not going to sustain this program,” she said.

She said she has talked to many people about the health exchange, including hospital administrators, doctors, nurses and residents, and they all agree there is a huge health care problem.

“Our health care system is in crisis right now,” she said.

Price said he is concerned about businesses reducing the hours of their employees so they would not have to provide health insurance for them.

He said not only did these employees lose hours, but now they have to pay for their health care. He said he would try to be transparent, particularly in this area, to educate people about the plans.

Other questions asked the candidates what they would do to reduce property taxes.

Bennett said she has spoken to many farmers who are hurting and said the state needs to make taxes more consistent for them.

She said the state needs to rein in spending and unfunded mandates, which indirectly cause property tax increases because local governments have to raise money to pay for the mandates.

Savick said the state does not have a say in local property taxes and said that was the result of towns and counties.

She talked about how the state has increased aid to cities and counties and talked about the problem farmers face because of rising land values.

Price said if he were elected to the House of Representatives, he would drive for simplified taxes.

Living in Alden, he said a lot of his neighbors are farmers. He said he would do whatever he could to help farmers.

Who would they support?

Tribune Managing Editor Tim Engstrom, who moderated the debate, asked each of the candidates who they would vote for if they could not vote for themselves.

Price said he would vote for Bennett because she is pro-life. They both believe life starts at conception.

Savick said the question was difficult for her because the other candidates have a different philosophy on government than she does, but if she had to pick she would vote with Bennett.

“But there are things she believes in that I don’t,” Savick said.

Bennett said she would support Price, who she described as a constitutional conservative, like herself. She also agreed with his view on abortions.