Donald W. Sievert, of Starbuck, born July 12, 1927, at home in Glenwood, the seventh of 10 children of Sarah ‘Sadie’ (Darrow) and Ernest Sievert, passed away July 11, 2014, in Glenwood, one day short of his 87th birthday. Visitation will begin at 9:30 a.m. Saturday at Starbuck Funeral Home, with a service to follow at 11 a.m. The family will host at the Starbuck VFW Post 4582, and inurnment will be at a later date. 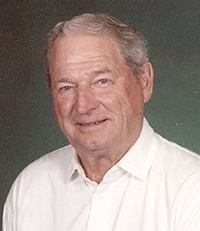 Don enjoyed track and pole vaulting, basketball and football in school. He worked on neighboring farms.

Being sidelined due to rheumatic fever, he went on to serve his country March 1945 through January 1948. First assigned with the Seabee’s to rebuild Okinawa, Don was then in the regular U.S. Navy.

Don pursued architecture, then engineering. The Sieverts resided in Albert Lea and Fairfax, S.C., where Don retired from KST-Scotsman in 1992, then consulted for another couple years.

He pitched softball, boxed, bowled, hunted duck, deer, pheasant, grouse and turkey, fished and was an avid golfer, golfing his age at 71. His hockey ‘career’ was very short lived. He was also a long suffering Minnesota sports fan.

Don was a member of Indherred Lutheran Church, the Glenwood American Legion, Starbuck VFW and served with both honor guards. He was proud to be a member of the Freeborn County Fastpitch Softball Hall of Fame, the Allendale County Hospital board, the AC Airport Commission and the Minnewaska Golf Course. In 2005, he was honored to receive his diploma from Minnewaska Area Schools. He enjoyed watching wildlife, playing cribbage, card games and dice, enjoyed ‘projects’ with the Sievert boys, horses, driving around Pope County gopher hunting, learning new things and had a very close relationship with all of his family. He woke up every day with a ‘good morning!,’ had a great sense of humor, was always teasing and had an awful sense of direction.

Don was preceded in death by his parents; step-mother; Betty’s parents; granddaughter, Vanessa Netka; all his siblings; two step-sisters; one niece and four nephews.

Memorials are preferred to the Starbuck VFW Post 4582, Starbuck Fire and Rescue or the charity of your choice. The family may be reached at P.O. Box 731, Starbuck, MN, 56381.