Eastern and western meadowlarks, ducks are on a yearly decline 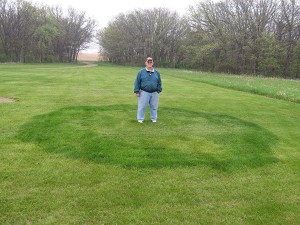 Jerry Peichel of Fairfax stands inside a naturally occurring fairy ring of mushrooms. Jerry is no elf, but folklore says this is a place where elves dance. – Al Batt/Albert Lea Tribune

“Everything is nearly copacetic. There’s lots of road work this year. Still Bill says that means there is a lot of money out there. I think he’s right. Someone has my share. I took Still Bill to the doctor and the dentist last week. He hadn’t been hearing as well as he should. The doctor told him that there was a build-up of wax in his ears that should be cleaned out and that would improve his hearing. Still Bill asked how much it would cost and was told that it would run about $180. Still Bill said to forget it. He’d heard enough. The dentist’s appointment didn’t go any better. The dentist checked Still Bill’s toothache and told him that he should have the tooth pulled. When informed that it would cost $400, Still Bill said that he’d just go the Surly Saloon, drink a few beers, smart off, and get the tooth knocked out for nothing. Look at the time. Too late to do anything. I was going to wash the windows of my house today, but I forgot something.”

“That you had a previous engagement?” I say.

“No, I’d forgotten that I hate to wash windows.”

A little bird told me

One day, I was slaving away in my yard, fighting a never-ending battle against plants that had forgotten their proper places, when a tiny bird landed on my hand.

It had the unkempt look of a feathered Einstein. It spoke, which might not be an odd thing for a tiny bird that looked like Einstein to do, but I plan on researching that by reading at least half the Wikipedia entry covering it. I will say that the tiny bird sounded wise. I held knuckles against my teeth as the tiny bird told me that all of nature loved me and meant me no harm. That changed my life. The next day, I went looking for my new friend. I wanted to thank the tiny bird for enlightening me. I searched all day and was bitten by 41,273 mosquitoes, some of them more than once. That tiny bird was a big liar.

Not a duck dynasty

Brian Wesley of Wells asked if I’d address the decline in the numbers of meadowlarks. We have two species here. Western meadowlark breeding populations have declined throughout the U.S. and Canada at about 1 percent per year since 1966 according to the North American Breeding Bird Survey. Declines are due to conversion of grassland breeding and wintering habitat to housing and agricultural uses. Other factors affecting western meadowlark populations include pesticide use, habitat degradation by invasive plant species, and fire suppression that alters native grasslands. Eastern meadowlarks are declining, too. The North American Breeding Bird Survey shows a severe rangewide decline estimated at between 2.9 and 14.8 percent per year from 1966 to 2010. Losses are due to disappearing grassland habitat. Prairie is scarce in the eastern U.S. and the farms that once hosted meadowlarks—small farms with pastureland and grassy fields — are being replaced by larger, row-cropping agricultural operations or development. Early mowing, overgrazing by livestock, and the use of pesticides harm nesting meadowlarks. I still find meadowlarks in grasslands and where cattle or horses are pastured.

“Are native bees cavity nesters?” Honey bees aren’t native, but native bees can be abundant and approximately a third of them nest in cavities. Cavities include plant stems. Some bees chew the pithy wood from the center of stems while others use pre existing holes in dead trees. Common cavity-nesting bees are carpenter bees, mason bees, leafcutter bees, and yellow-faced bees. Hollow-stemmed native plants include cup plant, joe-pye weed, pale Indian plantain, elderberry and sunflower. You may create nest boxes for native bees by building a small open-ended box and hanging it in a sunny location on a fence. Put a back on the box to discourage woodpeckers. They might still bother it. The box should be at least six inches deep. Fill the box with hollow stems cut from the aforementioned plants in the length of the box.

Ferd Stadtlander of Rockford, Iowa, asked about large ball-shaped mushrooms on the ground. The puffball mushroom is one of many simple plants called fungi. Fungi are plants that lack chlorophyll that makes plants green. Mold, yeast and bacteria are forms of fungi. These organisms grow wherever sufficient moisture and favorable heat are present. Because they cannot manufacture food from carbon dioxide, water and minerals as other plants do, fungi must consume leftover materials from other plants. This recycling process enriches the soil. Most fleshy-looking mushrooms encountered in the wild are saprophytes. They settle upon and disintegrate dead plants. The life of a mushroom begins as thin white threads called mycelium originating from spores. The mycelium may look like mold or feathery down. Puffballs are mushrooms of pastures, meadows and other grasslands, and are globular or dome-shaped, lacking typical narrow stems and cap of other common fungi.

Nature talk on the radio

“To him that watches, everything is revealed.” — Italian proverb

“Put your heart, mind, and soul into even your smallest acts. This is the secret of success.” — Swami Sivananda