Editorial: ESPN needs to step up and send a message 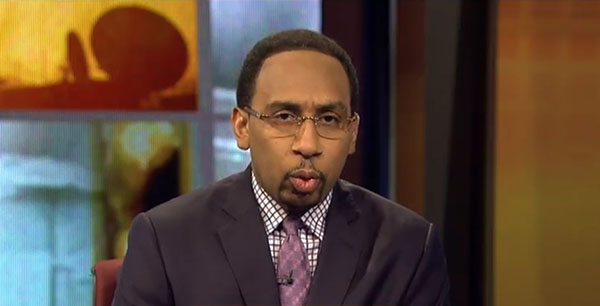 Stephen A. Smith on Monday apologizing for his comments on domestic violence.

ESPN took sports commentator Stephen A. Smith off the air for a week after he implied on the TV show “First Take” that women who are victims of domestic violence should make sure they don’t provoke the violence. The suspension comes after Smith apologized. He had been speaking on the NFL two-game suspension of Baltimore Ravens running back Ray Rice, who knocked his now-wife unconscious in an Atlantic City casino elevator.

Here are three things wrong with all of this … and a final thought.

• “Sticks and stones will break my bones but words will never hurt me.” Don’t people get the age-old lesson of that playground statement? Let spoken words be water under the bridge because, in the long run, that’s what happens to them. It’s the physical violence that gets remembered years and decades later. Provocation is no excuse for one human being to hit another. And the best defense, used by people with level heads, is removal from the location until everyone calms down.

• Smith gets paid to say stupid and controversial things about sports on “First Take.” So does Skip Bayless. ESPN chooses to be in the gutter by having their ilk on its cable sports network. The four-letter network would have a better reputation among broadcasters if it took a higher road, such as Fox Sports, NBC and CBS, but ESPN continues to seek out the lowest common denominator in sports broadcasting. Seeing Smith suspended for a week is a lousy punishment. He deserves six months.

• The NFL’s two-game suspension of Rice was a slap on the wrist. The punishment was handed down by commissioner Roger Goodell, and many are saying his insensitivity to domestic violence is shaping up to be the greatest mistake of his tenure. It could have been his moment to shine, to show the young men in the NFL that being a good citizen is more important than being a good football player. Rice, who admitted to knocking out his wife, deserved eight games — half a season.

Final thought: We unfortunately do not expect to see Goodell and the NFL change its course on Rice’s suspension because that institution is too insular and stubborn once it charts a course of action. However, ESPN might budge.

Officials didn’t call Smith’s suspension from the airwaves a suspension. He is just off the air. They said women and men at the network are having conversations on appropriate next steps. Note that in 2010 ESPN suspended commentator Tony Kornheiser for two weeks over comments he made on the radio about anchor Hannah Storm’s outfit. And in 2012 it imposed a 30-day suspension on anchor Max Bretos for using the term “chink in the armor,” supposedly without ill-intent, in reference to Asian-American NBA player Jeremy Lin.

ESPN said in its statement, “Stephen’s comments last Friday do not reflect our company’s point of view.” The network can prove it by handing down a stiffer penalty for its misguided mouth by the name of Stephen A. Smith.