Funeral services for Galen W. Christensen will be at 11 a.m. Monday at Bonnerup Funeral Chapel. The Rev. Richard Spande will officiate. Visitation will be one hour prior to the service at the funeral home. Interment will be at Clarks Grove Cemetery. 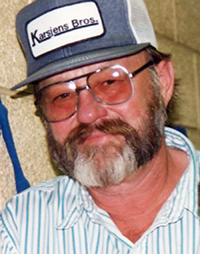 Galen Christensen was born Sept. 11, 1947, to Wilmer and Marguerite (Wright) Christensen in Albert Lea. He was raised on a farm outside of Clarks Grove. Galen graduated from Albert Lea High School in 1966. He was previously a member of Clarks Grove Baptist Church, where he taught Sunday school while he was in high school.

Following his schooling, Galen joined the United States Army. He was going through training when he got the news his family home had been hit by a tornado and was honorably discharged to go back home and help his family. Galen was a hard worker.  He farmed until 1985 and then was hired by the city of Albert Lea. He continued to work for the city until his retirement in 2011.

Galen enjoyed hunting, gardening and fishing, often going up to Boy Lake in northern Minnesota. He liked to go for car rides to see what the neighborhood was up to. Even after retiring as a farmer, he would still be seen driving around the gravel roads checking on everyone’s crops. Galen was a people person and found enjoyment by having conversations with various people. Galen loved to spend time with his family and always had a smile on his face when his grandchildren came over to the house to play.

Galen is preceded in death by his wife, Linda; father, Wilmer; mother and father-in-law, H.C. (Faye) Nelson; and a sister-in-law, Debbie Weite.