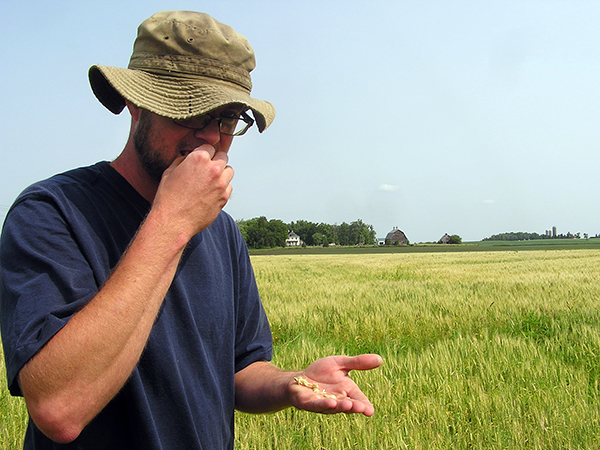 Ryan Batalden tastes a kernel of wheat, which helps him tell whether the wheat’s ready to harvest. – Mark Steil/MPR News

LAMBERTON — When Ryan Batalden graduated from college, he worked for a time in a Twin Cities office.

But, Batalden, who grew up on a farm, always felt the tug of the land.

“I was in a cubicle and I just couldn’t deal with it,” he said. “I didn’t really have any direction but I knew I had to work outside.”

So about 12 years ago, he left the office job and went to work on his parent’s farm and looked for opportunities to start his own. He managed to rent 80 acres, but that wasn’t enough to support him and his family.

He couldn’t find any other affordable land to rent, and to buy land he would have had to spend more than $3,000 an acre, which was out of reach.

As the nation’s farmers age, the aspiring young farmers who might replace them often find high land costs impossible hurdles. Buying 100 acres of good farmland can cost $1 million, and that amount of land often is too little to support a family.

But one approach that works for some young farmers is to find a partner, as Batalden did. An organic farmer, he lives with his wife and three children. They grow a variety of crops and raise pigs, cows and chickens.

Batalden, 37, found his partner seven years ago — just when it looked like full-time farming might remain just a dream — when he responded to a life-changing email.

“Supposedly this guy was trying to get some investors who wanted to invest in farmland linked up with organic and sustainable farmers,” he said.

The guy was Robert Karp, founder of New Spirit Farmland Partnerships, based in Milwaukee.

Karp remembers when he first called the young Minnesota farmer.

“Ryan was very appealing because he’d already been farming for five years,” Karp said. “He’d grown up on an organic farm so he had a lot of experience. And we could just see that he was a young man who knew what he was doing.”

Karp’s group had an investor who wanted to buy farmland, and then rent it to an organic farmer. After a search, the investor was able to buy 160 acres near Batalden.

Batalden leased the land at a cost below the rental price of neighboring property. A few years later, they took the same approach with a second purchase, for 100 acres. Today, he farms 260 acres with the assistance of the program, enough to support his family but still scratches his head at how long it took for him to become established.

“It’s really hard,” Batalden said. “It shouldn’t be this difficult, to farm.”

Karp said he helped match five other farmers around the United States with investors.

“It’s a unique moment to have so many young people interested in agriculture and we should be trying to help as many of them as we can find their way into farming,” he said.

Karp said because his effort works on a relatively small scale, more needs to be done.

Towards that end, other organizations also are working to help young farmers. Among them is the Minneapolis-based Land Stewardship Project.

It helps evaluate and instruct young farmers on what they need to do to get started, said Karen Stettler, who oversees the organization’s Farm Beginnings program.

“The farm beginnings program really helps people to think about their deeply held values and beliefs, put that into a goal, and then to also make sure to follow that goal up with helping them to assess finances and marketing strategies,” she said.

In the past 17 years about 600 people have gone through the program, and about 60 percent are still farming, Stettler said.

Batalden, the young southwest Minnesota farmer, said he was lucky to find the help he needed to expand his farming operation. But he said with the average age of the U.S. farmer approaching 60, the nation needs to boost efforts to give young farmers a start.

“I don’t know who we think is going to farm all this land,” he said. “As the baby boomers move off the land, we’re going to need a lot more people.”