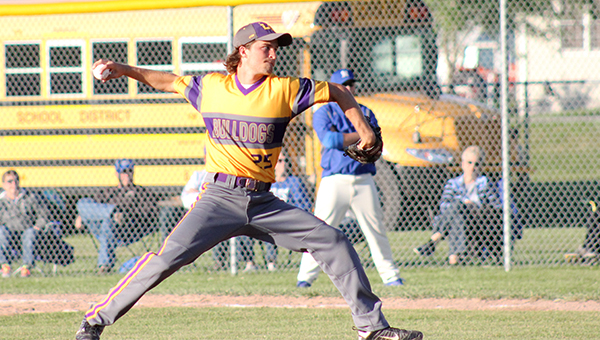 Josh Peters of Lake Mills pitches against North Iowa Tuesday in the quarterfinal round of the Class 1A, District 4 playoffs. — Jacob Tellers/Albert Lea Tribune

The Bulldogs darted out to a 8-0 lead in the bottom of the first inning and didn’t let up the offensive pressure, scoring an additional two runs in the third inning and five more in the fourth to take a 15-0 lead with only one out in the inning. 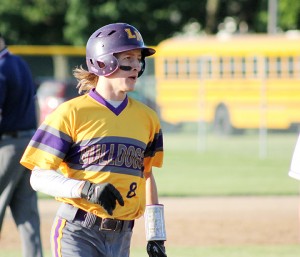 Lincoln Bohemer of Lake Mills runs to third base Tuesday against North Iowa in the Class 1A, District 4 quarterfinals. — Jacob Tellers/Albert Lea Tribune

The score at the end of the inning evoked the Iowa High School Athletic Association’s mercy rule.

A single on a line drive to center field by Matt Thorne drove in the Bulldogs’ first run. Thorne immediately stole second base, the first of four steals by Lake Mills as a result of aggressive base running.

Taylor Thorne had two steals, while Matt and Lincoln Boehmer came away with one steal each.

“We like to be aggressive, especially when we have guys on second or third base,” Blaser said. “Most of the time we are successful in stealing the bases, and we were tonight.”

A short bunt by Levi Meyer loaded the bases with only one out in the first inning for the Bulldogs. Three straight walks gave Lake Mills three more runs.

The Bulldogs had many quality at-bats with good pitch selection.

“I thought we did a great job at the plate, he said. “We were focused in terms of trying to put the ball into play where it was pitched.”

Blaser said the Bulldogs were patient once they got ahead in the count, which allowed them to either get solid hits or easy walks.

The Bulldogs’ eight-run scoring streak came to close when Mateo Peña was tagged out on an attempt to steal home.

Neither team scored in the second inning. In the top of the third, decisive play by the Bulldogs’ defense helped pitcher Josh Peters maintain the shutout.

A walk and a hit in the third inning put North Iowa runners on first and second with only one out. Quick throws to second and first after a grounder closed the inning with a double play before the Wildcats could get a rally started.

Josh Peters allowed only one hit through four innings while walking one batter and striking out three. This playoff win gives him a 6-1 record for the season with a 1.65 earned-run average.

“Josh was spot on,” Blaser said.

After the game, the Blaser told his team he was impressed with the way they maintained their focus despite jumping ahead to an early 8-0 lead.

Taylor and Pins led the Bulldogs at the plate by going 3-for-3 with three RBIs. Taylor scored three runs along with his two stolen bases. Pins had one run and a double.

The Bulldogs defeated the Wildcats 10-0 early in the season, but Blaser said he thinks Riceville has improved since then, and he isn’t going to take them lightly.

“Nothing is guaranteed no matter how many games we’ve won,” Blaser reminded his players after the game.