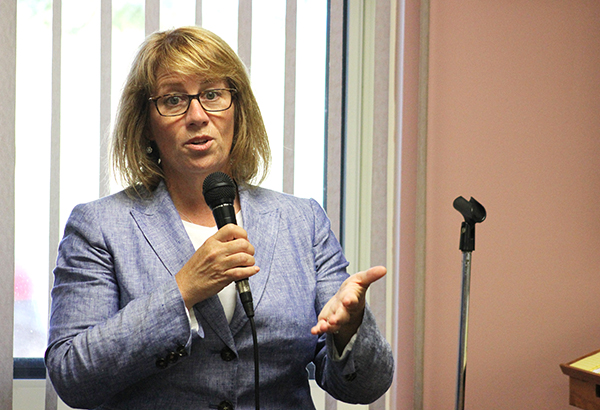 Minnesota House Majority Leader Erin Murphy speaks Tuesday at Senior Tower about the progress made during the last two years for seniors and the disabled. – Sarah Stultz/Albert Lea Tribune 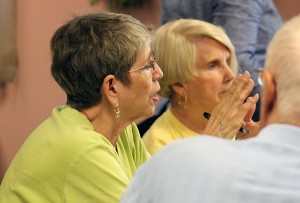 As part of a roundtable discussion with District 27A Rep. Shannon Savick, DFL-Wells, and Rep. Rick Hanson, DFL-South St. Paul, the legislators talked about everything from the state budget and taxes to gay marriage.

“I love when we have a chance to get together about the issues Minnesota faces,” said Murphy, DFL-St. Paul, to a small crowd at Senior Tower.

She said she was grateful to have the chance to explain the Legislature’s goals and accomplishments.

Murphy and Savick said the state made a significant investment in senior nutrition after the federal government cut some of the funding for this program.

The legislators also talked about balancing the budget, increasing local government aid, the addition of no-excuse absentee voting and roads and bridges.

Hanson applauded Savick for her efforts to get support for cleaning up Fountain Lake. 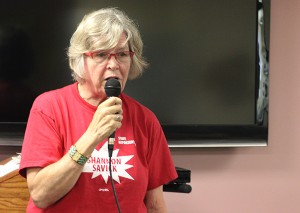 When it came time to answering questions from the public, the first question asked was whether the legislators had supported same-sex marriage.

Savick said District 27A was split on the issue, so she was able to choose which way to vote.

“It was a non-issue for me,” Savick said. “It was something I believed strongly in, to be able to marry the person you choose.”

She noted that her brother is gay and didn’t think him being married would have impacted her own marriage.

“He did not choose to be gay,” she said. “He did not want to be gay. It was a condition of birth.”

“I think it’s important that two people who love each other have the ability to get married,” she said.

Murphy asked the seniors at Senior Tower to think hard about the future and keep Savick in office, whom she described as “skillful, determined, experienced and super smart.”

Savick, former mayor of Wells and retired from the computer field, will face off against first-grade teacher Peggy Bennett, R-Albert Lea.