David and Teresa Malakowsky of Minnesota Lake and Robert and Catherine Wittmer of Alden announce the engagement of their children Amelia Malakowsky and Colin Wittmer. 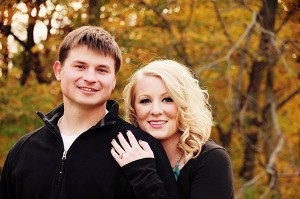 The bride is the granddaughter of Harvey and Emily Malakowsky of Wells and Donald and Linda Bryson of Alden.

The bride is a 2010 graduate of Maple River High School and a 2013 graduate from the Cosmetology Training Center. She is currently employed as a stylist at Ulta in Mankato while pursuing her associate’s degree.

The groom is a 2003 graduate of Alden Conger High School and a 2006 graduate of South Central College in North Mankato with an associates degree in agribusiness. He is employed as the Freeborn County solid waste officer and is also engaged in farming.

A wedding is planned for Aug. 30, 2014, at Concordia Lutheran Church in Pickerel Lake.