Funeral services for Melvyn Edward Jensen, 75, of Albert Lea, will be at 10:30 a.m. Wednesday at the First Baptist Church of Clarks Grove. The Rev. Clayton Balsley will officiate. Interment will be in the Clarks Grove Cemetery. Military honors will be accorded by members of the American Legion and VFW Honor Guard. Visitation will be from 5 to 7 p.m. Tuesday at the Bayview/Freeborn Funeral Home and one hour prior to the service at the church on Wednesday. Online condolences are welcome at www.bayviewfuneral.com. 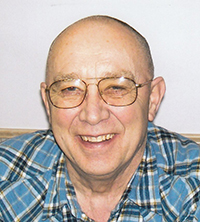 Melvyn passed away peacefully on Thursday, July 3, 2014, at the Lake City Medical Center, surrounded by his family.

Melvyn Edward Jensen was born on Dec. 7, 1938, in Albert Lea, the son of Wallace and Emyline (Jensen) Jensen. He grew up in Albert Lea and graduated from Albert Lea High School in 1956. He served in the U. S. Army on active duty from 1957 to 1959, and then in the reserves from 1959 to 1963. Following his discharge he farmed for a couple of years. He then became a hog buyer for Wilson & Co. (later Farmland), a career he would have for over 30 years. In September 1975 Melvyn was united in marriage to Nancy Malmgren in St. James. They lived in Iowa for several years, returning to Albert Lea in 1997 following Mel’s retirement. Mel worked several jobs to keep busy in his retirement including for Mrs. Gerry’s and Walmart. He enjoyed fishing, especially for catfish, and watching basketball, football and baseball. Blessed be his memory.

Melvyn was preceded in death by his parents Wallace and Emyline, his grandson Tyler, his brother Fred Jensen and niece Cindy.