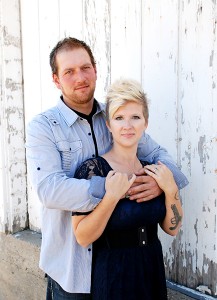 The bride is a 2006 graduate of Alden-Conger High School. She currently works as the office manager for Menuetta in Edina, photographer and owner of Timeless Photog in Albert Lea and choreographer at Echo Step Studio of Dance in Albert Lea.

The groom is a 2002 Albert Lea High School graduate. He currently owns Karsjens Floor Coverings Plus in Albert Lea.