Pastor from area moves up in LCMS

Formerly a missionary of 16 years in Eastern Europe, the Rev. James Krikava was installed as the Lutheran Church Missouri Synod’s associate regional director for Eurasia on June 23 at the LCMS International Center. 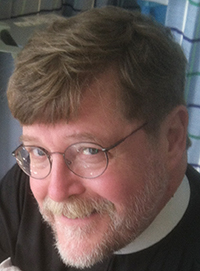 As associate regional director, Krikava will represent the Synod president and other Synod officials with partner churches in Eurasia, assisting the Rev. Tony Booker, regional director for Eurasia.

Krikava was an ordained pastor in the Evangelical Lutheran Synod until earlier this year when he became an ordained pastor in the LCMS through the colloquy process. He served as a missionary from 1990 to 2006. Krikava said he looks forward to returning to Eastern Europe, connecting with other Lutheran church bodies and encouraging them to become members of the International Lutheran Council, a worldwide association of 35 established confessional Lutheran church bodies of which the LCMS is a member.

Booker said Krikava helped start four Czech-speaking Lutheran congregations and an English-speaking congregation for expatriate in Prague during his 16-year tenure. “He has set the stage,” Booker said. “He’s highly honored, highly respected there. I have the honor of being able to work with him. It’s just fantastic.”

In addition to his LCMS Eurasia duties, Krikava also serves as a regional teaching fellow to Europe for Luther Academy, an independent Lutheran theological institute founded by the late Rev. Robert Preus. The academy promotes confessional Lutheran theology in mission fields throughout the world through publications, conferences and other educational endeavors.

Krikava graduated from the University of Minnesota in 1976 with a Bachelor of Science in music education. He completed his Master of Divinity from Bethany Lutheran Theological Seminary in 1983.

A native of rural Glenville, he served as an instructor of religion and music at Bethany Lutheran College in Mankato from 1980 to 1984, where he taught religion courses and served as a preacher in the chapel program. He established an instrumental music program for the college and served as director of the concert band, jazz band, brass quintet and choir. After his tenure at Bethany, he served as pastor of Trinity Lutheran Church, Brewster, Mass., from 1984 to 1990, as a missionary from 1990 to 2006 and again at Trinity Lutheran Church in Brewster upon returning from the mission field from 2006 to 2014.

The Krikavas have two daughters, a son and eight grandchildren.