Emily is the daughter of Jerry and Mary Reyerson of Alden and Jane and Mike Bute of Alden. She is the granddaughter of Colleen and the late John Nelson of Albert Lea, Harold Reyerson of Manly, Iowa, and Bonnie Holey of Coon Valley, Wis. 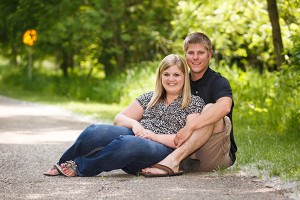 The bride is a 2008 graduate of Alden-Conger High School and graduated from South Central College in North Mankato in 2011 with a degree in graphic communications. She is the owner of Sparkling Image Photography & Graphic Design in Alden and is the executive director at Wells Area Chamber of Commerce.

The groom is a 2007 graduate of United South Central High School and graduated from Riverland Community College in Austin in 2009 with a degree in carpentry. He is a custom applicator at Farmers Coop in Rake, Iowa.