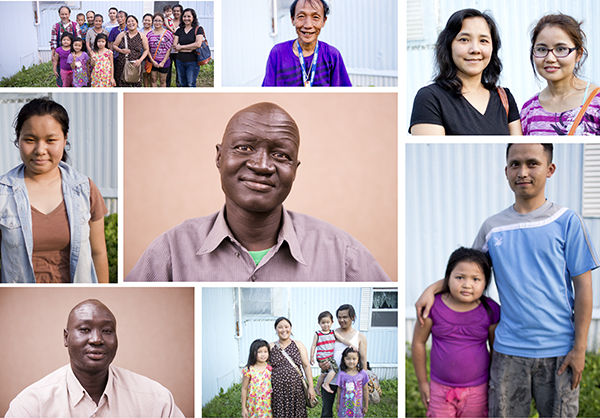 There are an estimated 350 refugees from South Sudan and Burma currently living in Albert Lea. – Colleen Harrison/Albert Lea Tribune

Editor’s note: This is the last of a three-part series about refugees living in Albert Lea.

Twenty-year-old Kasee Yar is on her way to achieving the American dream.

Yar, who moved to St. Paul in 2008 from a refugee camp in Thailand, attends Riverland Community College in hopes of earning an associate degree in radiology. 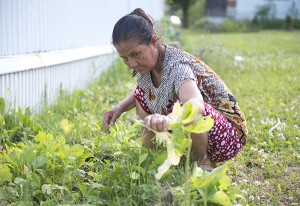 Tok Stoo works in the community garden outside a trailer that the local Karen community uses for meetings and worship services. The community grows onions, lettuce and other vegetables in the shared space. – Colleen Harrison/Albert Lea Tribune

“My goal is to continue to get my nursing degree,” she said.

But it hasn’t been an easy path, she said.

Yar said she began learning English when she and her family lived in St. Paul, and she continued those efforts when they moved to Albert Lea in 2010.

She said while there are many positive benefits to living in this country, there are many challenges she and other Karen people face because of differences in cultures and language.

Her story is similar to other refugees living in the community seeking a better life but who are struggling to reach it.

One piece of the puzzle

Ann Austin, executive director of the United Way of Freeborn County, said when refugees move to the United States it is not uncommon for them to first go to larger cities such as St. Paul, which are classified as resettlement communities with the federal government.

These cities promise to help refugees with various services, including housing, jobs, interpretation and education. 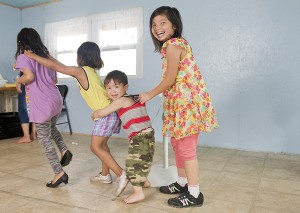 Karen children play in a community trailer while their parents work on adjustments to the space. Kasee Yar said that the younger children in the local Karen community are fluent in both English and Karen, but can’t read or write in the Karen language as they have no one to teach them. – Colleen Harrison/Albert Lea Tribune

However, when refugees move away from larger resettlement communities to rural cities such as Albert Lea, they often find these resources are lacking.

Austin said while Albert Lea can offer jobs to refugees, it needs help offering the other resources.

“There’s one piece of the puzzle, and the rest of it is out there,” Austin said.

Austin and a group of community members are trying to establish a resource center for refugees and other immigrants moving to Freeborn County.

A resource center would provide information on how to obtain a driver’s license or bank account, how to apply for jobs, where to go to find housing, where to find child care and and other guidelines, to name a few.

A Karen and Sudanese representative would be on hand to communicate with refugees who cannot speak English or who have questions.

Dabang Gach, a Sudanese refugee who moved to the United States in 1989 and to Albert Lea in 2010, is eager to volunteer his time at the resource center to help his people.

He formed the Southern Sudanese Community of Albert Lea as a means to help other Sudanese refugees become successful.

“We can work as American citizens, and then we can work for the American dream.” he said. “There’s a lot of opportunity to achieve.”

He said while there are many opportunities in Albert Lea, it is difficult for refugees to access them because of language barriers.

That’s where a resource center would come in.

A resource center for all

J.D. Carlson, deputy director of police with the Albert Lea Police Department, said the idea for a resource center came out of a Blandin Community Leadership Program. The residents who attended the leadership retreat divided into small groups, and one of the groups — under the guidance of Albert Lean Mary Laeger-Hagemeister — decided to take on the project. 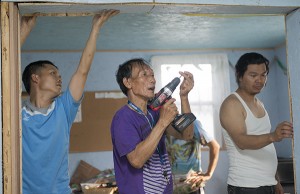 From left, Htoo Gax Wol, Mello Saw and Ka De work on opening up a room in a trailer the local Karen community uses for meetings and worship services. The community has no other central location to meet at, something they hope will change as plans for a possible resource center in Albert Lea are discussed. – Colleen Harrison/Albert Lea Tribune

“The ultimate goal is to ease the transition to our community, the city of Albert Lea and Freeborn County,” he said. “We’re trying to establish a location where it’s much more efficient, and it’s not just for refugees, it’s for anybody.”

Austin said she applied for a grant from the state refugee resettlement office to cover the cost of a part-time coordinator at the resource center from noon to 5 p.m. each day. She said a state official assured her that even if Freeborn County is not awarded the grant, the state recognizes the need for more resources in the community.

Freeborn County Administrator John Kluever said the space being considered for the resource center is in the former Shell Rock River Watershed District office in the historic part of the Freeborn County Courthouse.

He said the Freeborn County Board of Commissioners is expected to take action during an August meeting on whether to allow the use of the space. At least one commissioner is questioning whether the community groups should have to pay to rent the space.

Penny Jahnke, Adult Basic Education coordinator, said she is in favor of the resource center and helping refugees and others new to the community become self-sufficient.

“If we’re really looking at what’s best for our county, our city or whatever, the more people we can help become self-sufficient, aren’t we benefitting our community?” she said. “Why wouldn’t we want to help people and build people up?”

She said she wishes she could take community members into the homes of the refugee families who attend Adult Basic Education to learn English or earn their GEDs.

“They are working so hard to make their lives better, and I don’t know why we would put barriers in there,” Jahnke said.

She encouraged community members to welcome both the Karen and Sudanese refugees and to try to communicate with them.

“I think Albert Lea really needs to welcome our refugees,” Jahnke said. “They are providing a lot of work for Albert Lea, and they have a lot of great things to offer.”

See a video of interviews and other happenings from the entire series here.