Repairs are underway on the Edgewater Park Cottage as the Cloverleaf Lions Club works to renovate the century old former farmhouse.

According to Bob Goldman of the Cloverleaf Lions Club, the city of Albert Lea has turned over the responsibility of the repairs to the Lions Club. Once the work is finished the cottage will be turned back over to the city for public use. 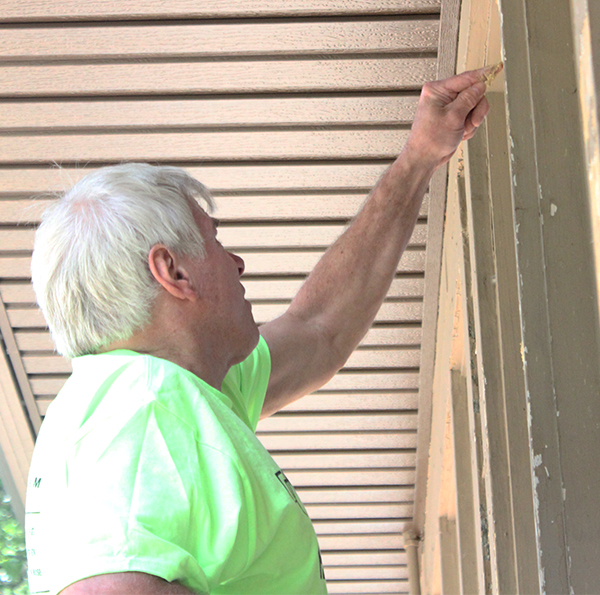 Volunteer Ron Stangland paints the outside of the Edgewater Park Cottage Monday. Work began in June and is expected to last through Labor Day. – Jacob Tellers/Albert Lea Tribune

“I remember playing here when I was a little boy,” Goldman said. “I used to go to that counter and check out horseshoes, buy ice cream and buy a bottle of Coke for a nickel.”

Over a dozen volunteers have been working since June on the renovations to the 100-year-old structure.

Work has included repairing the outside deck, clearing out cement in the basement and replacing the roof with new tiles and edges. Pipes will be installed to drain water away from the basement, windows will be replaced and the deck will be stained.

Goldman said he hoped to have most of the outdoor repairs finished by July so the group can focus on the indoor work.

Some workers in the Sentence to Service program also contributed to the repairs.

“The Sentence to Service individuals through the jail have worked very hard to clear out the cement in the basement,” Goldman said.

“They broke the whole basement up with a 5-pound maul and physically picked up and carried the concrete out of the basement,” Tony Trow added.

The biggest decision to be made Monday was figuring out what paint color to choose for the interior walls, which will begin later this week.

After poring over a smorgasbord of choices, they chose tea cookie, a light tan hue.

The repairs will potentially last through Labor Day, Goldman said, noting that some additional issues had come up with the project.

“We need more volunteers,” Goldman said. “We found some structural issues that we didn’t expect initially so we need a couple thousand dollars of cash contributions.”

The problem that the workers came across was the northeast foundation of the cottage was worn out and in need of repair.

According to Goldman, any donations to the project are tax-deductible, and they are still looking for more people to help out on-site as well. Goldman can be reached at 507-373-9197.