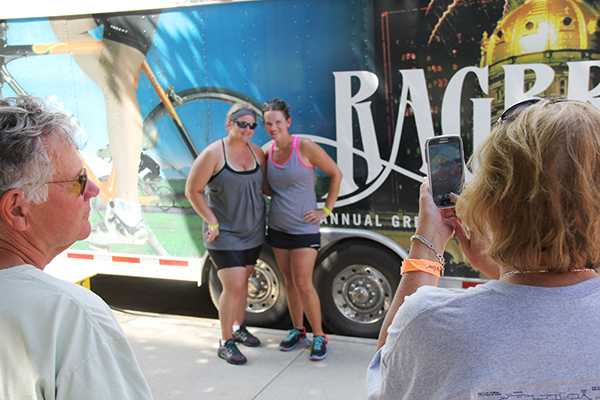 By Jacob Tellers and Tim Engstrom

MASON CITY — Whisky Creek Woodfire Grill owner Jay Kyvigne set up an outdoor shop in downtown Mason City along with dozens of other vendors on Wednesday, hoping to get in on the feeding frenzy as hundreds of famished cyclists arrived in Mason City.

“The planners did a great job. It’s a perfect day for this,” Kyvigne said about the moderate July weather.

Mason City hosted thousands of bicycle riders for the Register’s Annual Great Bicycle Ride Across Iowa. There are about 9,000 registered riders, but many hop on without registering or for just a day or two. A count at the Okoboji stop this week placed 20,000 riders. Typically, a nice day on the route attracts 12,500 riders.

Mason City, touting its revamped downtown landscape, had concerts from noon to 2 a.m., with former Poison lead singer Bret Michaels topping the bill and a leading attraction for the week.

According Kyvigne, using the 12,500 estimate, Wednesday was the day with the most people in Mason City in its entire history.

This is the third year Kyvigne has served for RAGBRAI. He’s done it once in Clear Lake and once before in Mason City when the ride last passed through in 1985.

Pulled pork sandwiches and baby-back barbecue ribs were the favorites.

There were two stages. Michaels and the hair band Warrant played on the main stage in the evening. In the afternoon, performers were found at the Vi-Cor Plaza stage, where Dave Sappenfield could enjoy the sounds. After all, the stage was right outside the door of Rieman Music, where he works as a sales associate.

“I’m glad the organizers had them play right here at the plaza,” Sappenfield said. “It’s clean. People can walk around, and it has good acoustics.”

Roger Henson came all the way from Crested Butte, Colo., to ride RAGBRAI. He described the 41.2-mile jaunt from Forest City to Mason City as scenic. It followed the shore of Clear Lake and the winds were mostly calm. After parking his bike, he went looking for pie.

Others went looking for beer and found it at Mason City Brewing, such as 66-year-old Doug Quelland and 68-year-old Lex Koestner. They came from Phoenix but have Iowa roots, having attended Iowa State University in the 1960s. It was Quelland’s 15th RAGBRAI and Koestner’s 10th.

Quelland, a business owner and Republican politician back in Arizona, is known for a moustache he has had since January 1971. He said there are six reasons to go on RAGBRAI: see relatives, see old friends, meet new friends, see parts of Iowa never visited before, eat good food and ride a bicycle.

Peggy Summerside needed to charge her cellphone when she arrived in Mason City but didn’t have her cord or a place to plug it in. Fortunately, she found an exhibition booth set up by the Ames, Iowa-based PowerFilm Inc., which uses solar power to recharge devices. It offered no-cost phone charges to riders.

Summerside and her friend Donna Lautenbach hail from cities near Green Bay, Wis. It was their first time on RAGBRAI. They had ridden two non-competitive organized bike rides in Michigan, two in Illinois and various ones in Wisconsin. After hearing they should go on the granddaddy of them all in Iowa, they finally did and said it was indescribable.

Lautenbach said the hospitality of the Iowa communities sets the ride apart from all the others.

Some riders didn’t travel far. Tony Reynolds and his wife, Missy, rode their bikes to Mason City from their home in Forest City. After the one day of enjoying the route and the food, they returned to work and family life with their two sons.

Stephanie Anacker and her father, John Hanold, had ridden RAGBRAI when Anacker was younger. Now they wanted to ride again with Anacker’s sister, Alison Hanold. They came over from Genesee Depot, Wis.

Chris Walraver had biked a stretch of RAGBRAI last year and convinced his 12-year-old son Trant to join him this time around.

“It was not really tiring, but fun,” Trant said, even though he had to get up at 8 a.m.

Trant had run a 5-kilometer race before so the 40-mile bike ride wasn’t as much of a daunting task.

Both Chris and Trant said one of their favorite parts of the ride was the food they got to try at all the stops along the bike route.

Trant’s favorite vendor item of the hot day was an ice cream sandwich. His father’s was the woodfire pizza.

Carlos Shipley and Ruth Cabral came up all the way from Phoenix. This was Shipley’s seventh ride and Cabral’s fourth. They’ve ridden the RAGBRAI route on a tandem bike together each of the past four years.

“It’s something I had heard about as a kid and always wanted to do, and I finally got around to doing it,” Shipley said. 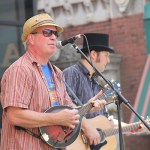 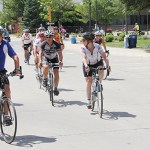 Riders on the Register’s Annual Great Bicycle Ride Across Iowa coast into downtown Mason City and prepare to park, connect with friends at the message board and enjoy the activities. — Tim Engstrom/Albert Lea Tribune 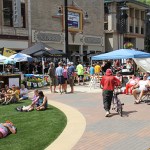 Bike riders soak up the sounds of performers at the Vi-Cor Plaza in downtown Mason City on Wednesday. Some drink beer while others down soda or sports drinks. One woman sleeps on the grass. The number of people later increased as more riders arrived. — Tim Engstrom/Albert Lea Tribune 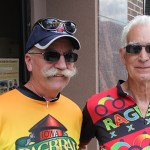 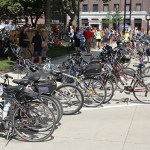 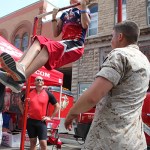 Jacob McMillin, 14, completes a pull-up Wednesday in downtown Mason City at a booth staffed by recruiters for the U.S. Marine Corps. He did 10 pull-ups to the applause and cheers of the RAGBRAI crowd. — Tim Engstrom/Albert Lea Tribune 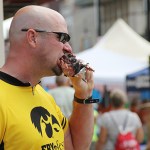 Tony Reynolds of Forest City chomps a turkey drumstick Wednesday in downtown Mason City. Food selections were abundant from local vendors and from vendors that move from city to city each day of the statewide bicycle ride. — Tim Engstrom/Albert Lea Tribune