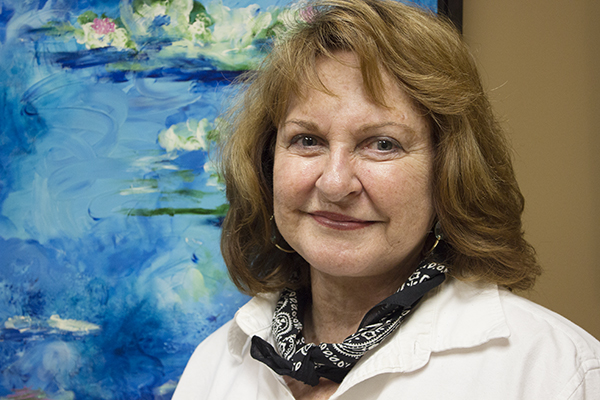 Marty Shepard is the artistic director of the Albert Lea Art Center and has a few pieces in the “Envision the Impressionist” exhibit. She stands in front of her acrylic painting “Earth, Wind, Water.” – Hannah Dillon/Albert Lea Tribune

“Envision the Impressionist” will be at the Art Center until Sept. 27. The show opened on July 27 with an open house that artistic director Marty Shepard said went very well. 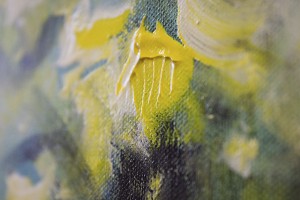 Impressionism utilizes texture and color to capture a moment in a painting. A closeup of “You are my Sunshine,” an acrylic painting by Marty Shepard, shows the bright color and thick texture of the paint used to create the piece. – Hannah Dillon/Albert Lea Tribune

Office manager Joyce Purdy said there was a different show planned for this time frame but plans fell through. The impressionism show replaced that, and Purdy and Shepard said many people attended the open house and attendees had good things to say about both the art and the Art Center’s new venue on Clark Street.

There are 15 artists in the show, 14 of which are Art Center members. Purdy and Shepard said that there is one new member who is showing his art in this show, and that the open house attracted many new people that they’d never seen before.

Impressionism is a popular school of painting, Shepard said. Many people associate it with Claude Monet, but some other artists that helped kick-start the movement were Edgar Degas and Camille Pissarro.

The style originated in the late 1800’s. Monet, Degas and Pissarro wanted to pull away from the traditional style of painting, but they weren’t working together as a group. Rather, they were independent artists with diverse approaches to painting, but painted in a way that is now considered impressionism, according to the Metropolitan Museum of Art’s website.

Impressionism is a style of painting that lacks elaborate detail but utilizes texture, color and lighting in ways that the traditional painting of the late 1800s did not use. 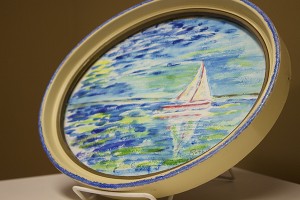 A wide array of media can be used to create impressionist art. “Blue Horizon” by Ruth Olson conveys the impression of a sailboat on the ocean with watercolors. – Hannah Dillon/Albert Lea Tribune

Many critics of the style said that the paintings looked like unfinished sketches, or impressions, which is where the name of the movement came from, the Metropolitan Museum of Art’s website said. In reality, the artists were trying to do just that — they wanted to capture a moment before it disappeared.

While critics looked harshly on impressionism, progressive writers of the time said that the style was modern and captured depictions of daily life that other styles of art couldn’t, according to the Metropolitan Museum of Art’s website.

Now, Shepard said that impressionism is probably one of the most recognizable styles of art to people in this area. The Art Center has some teachers who teach the style, such as Bonnie Broitzman, Beth Tostenson and Barb Butler. Purdy said there will be adult and child classes in impressionism this fall through Community Education.

Shepard said this show falls in the middle of the Art Center’s capital campaign and that the show gives the community more chances to donate. She said that the Art Center has almost reached its goal of $500,000.

Who: The Albert Lea Art Center

What: Envision the Impressionist