At least 2 injured in crash 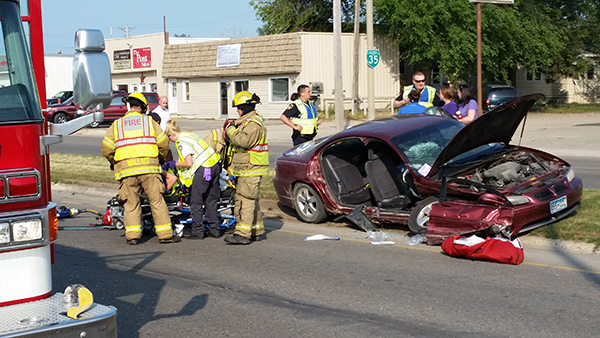 Firefighters, paramedics and police officers assist with the extrication of a person from a car following a crash Friday on East Main Street in Albert Lea. — Tim Engstrom/Albert Lea Tribune

Two people were injured Friday evening in a crash near the intersection of Katherine and East Main streets.

Initial Albert Lea Police Department logs indicate one person was transported by ambulance to Mayo Clinic Health System in Albert Lea and another by private vehicle. The logs listed Kelsey Drew Eide, 27, and Taylor Lin Roberts, 22, but it is unclear if others were involved.

It appeared at least one person had to be extricated from a vehicle.

The crash, at 5:23 p.m., involved a maroon Pontiac and a black Chevrolet sport-utility vehicle.