Funeral services for Dagnie Lorraine Weum will be at 11 a.m. Wednesday at First Lutheran Church in Albert Lea. The Rev. John Holt will officiate. Interment will be at Hillcrest Cemetery. Visitation will be from 5 to 7 p.m. Tuesday at Bayview/Freeborn Funeral Home and one hour prior to the service at the church. Online condolences are welcome at www.bayviewfuneral.com. 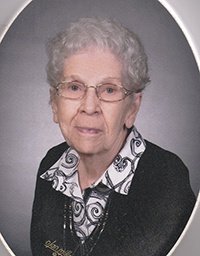 Dagnie L. Weum was born April 8, 1920, in Albert Lea, the daughter of Enoch and Ella (Flaskrud) Hanson. She was raised and attended school in Albert Lea. Dagnie was united in marriage to Clifford Peterson in 1937 in Iowa. The couple later divorced and she then married Alf Weum in 1976 in Albert Lea.

Dagnie enjoyed being a homemaker and working as a nursing assistant. Crafts, traveling, crocheting, knitting, cake decorating and refurbishing dolls were just some of her many enjoyments. Watching the Minnesota Twins was also a pastime for her. She was a member of First Lutheran Church and the Eagles.

Survivors include her children Barbara Waalkens, Sandra Fredrickson, Cliff Peterson and Charles (Vivian) Peterson, all of Albert Lea; stepchildren Karen (James) Meyering of Iowa, Linda (Lee) Schrepel of Oregon, Bump Weum of Prior Lake and Marcia (Tom) Baker of Oregon; and many grandchildren, great-grandchildren and great-great-grandchildren.