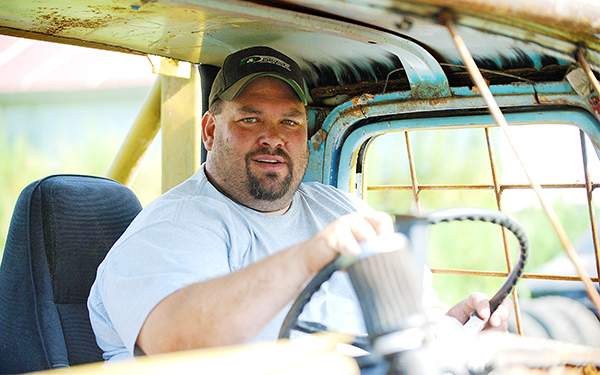 Ryan Linde sits Saturday in his ‘62 Ford truck. The truck has a 360 Chevrolet engine, and Linde took first place with it on Aug. 3 at the Freeborn County Fair’s demolition derby. – Micah Bader/Albert Lea Tribune

A passion for smashin’

TWIN LAKES — It started with a ’65 Ford Fairlane. 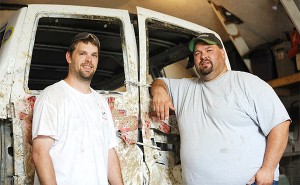 Ryan Linde was 16 years old, and the car was given to him after collecting dust in his grandmother’s garage.

The motoring enjoyment has been passed on to his stepson, Dalton Bradley. Along with restoring a ’49 Chevy truck together, Linde helped Bradley get his first derby car, a ’96 Oldsmobile Cutlass Supreme, ready for the Mower County Fair Sunday in Austin.

“My favorite part is working on them,” Linde said. “I’m just about done, and my son is starting.” 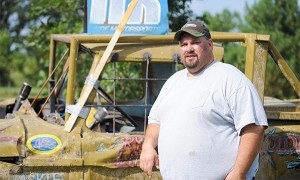 Ryan Linde stands Saturday next to the ‘62 Ford truck that he modified by welding 150 feet of square tubing to the frame to compete in demolition derbies. – Micah Bader/Albert Lea Tribune

Linde and Joel had even more success a week earlier during the Freeborn County Fair’s demolition derby in Albert Lea. The brothers won two of the four divisions. Joel’s stock van took first place in the mini division, while Linde and his modified ‘62 Ford truck with a 360 Chevy engine won its division.

The brothers didn’t compete in the same class this year, but Joel — who’s been driving in derbies for five years — said they have in the past.

“We ran mid-size together before,” he said. “It makes it a lot of fun.”

Joel said the shop at Linde’s farm is where all of his derby cars have been stripped and modified. 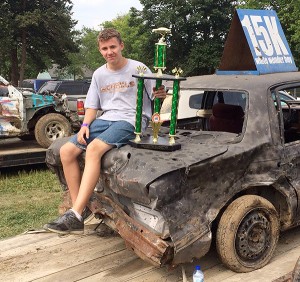 Linde said his first demolition derby was in ’97, and the first time he entered the trucks division was ’98.

“The good thing about a truck — even a stock truck — you can get three runs out of it before its junk, so you can have a little fun,” he said. “You can get 20 to 30 demos out of these mod trucks.”

In 2009, Linde went wild with derby cars. He said he wrecked 29 that year and was able to do so because he scrapped metal in his spare time.

“Whenever I find a cheap car, I buy it up,” he said. “If they run, we keep ’em until we have a little fun with them. If they don’t, then we just cut them apart and scrap them out.”

Linde is a ’91 graduate of Albert Lea High School and a graduate of South Central Technical College, which is now Kirkwood Community College.

He originally signed up for classes to be a diesel mechanic, but switched to the electrician track. For the last 15 years, Linde has worked for E&I Specialists out of Sioux Falls, S.D., wiring ethanol plants, he said. The company is building a prototype ethanol plant in Emmetsburg, Iowa, and Linde said he is the electrical superintendent in charge of running a crew of 45 workers.

When he’s not working for E&I Specialists or on cars, Linde said he enjoys taking his Winchester Super X, 12-guage shotgun duck and deer hunting.

“We’re pretty religious when it comes to hunting,” he said. “We go around Upper Twin (Lake) and Pickerel (Lake).” 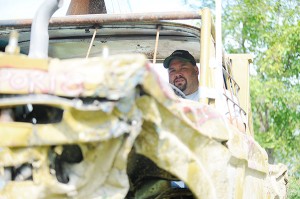 Ryan Linde looks out Saturday where the windshield would be in his modified ’62 Ford truck. – Micah Bader/Albert Lea Tribune