Ly Minh Dinh of Des Moines and Travis David Klatt of Albert Lea were married at 1 p.m. June 14, 2014, at Basilica of St. John in Des Moines in a double ring ceremony. 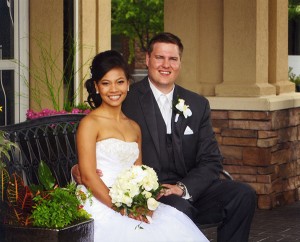 The groom is the son of David and Shari Klatt and the grandson of the late Virgil and Carmen Klatt of Blue Earth, Joyce Kinner and the late Calvin Kinner of Anderson, Ind.

The groom graduated from Albert Lea High School, Drake University in Des Moines and as a doctor of podiatry from Des Moines University. He is employed at Veterans Administration Healthcare Systems in Loma Linda, Calif.

The wedding trip was to San Diego, and the couple will live in Redlands.