Jeanette Lois Wigern, 83, of Kiester died Sunday, Aug. 24, 2014, surrounded by her family at Parkview Care Center in Wells. Funeral services will be at 10:30 a.m. Friday at Our Savior’s Lutheran Church in Kiester. Visitation will be from 5 to 8 p.m. Thursday at Bruss-Heitner Funeral Home in Wells. Visitation will continue one hour prior to the service at the church on Friday. The Rev. Katie Pals will officiate and interment will be in Our Savior’s Lutheran Cemetery in Kiester. Please see www.brussheitner.com to leave online condolences. Bruss-Heitner Funeral Home of Wells is in charge of arrangements. 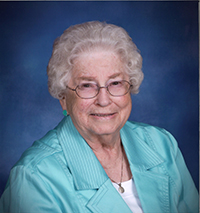 Jeanette was born Feb. 13, 1931, the daughter of Henry and Gladys (Gaines) Schroeder. Jeanette held various jobs prior to becoming a farm wife and homemaker. She was united in marriage to Manville A. Wigern June 29, 1952. To this union four children were born. Her hobbies included gardening, jigsaw and word search puzzles, embroidery, sewing and baking. She was a member of Our Savior’s Lutheran Church and Sarah circle and the American Legion Auxiliary Post 454.

She was preceded in death by her parents; her son, Gary, in 2006; her husband, Manville, in 2011; grandson, Patrick Freeberg, in 2010; brothers Harold and Clarence Schroeder; and sister, Eileen Bloomingdale.