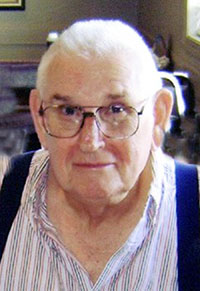 A gathering to remember Larry will be from 5 to 7 p.m. Thursday at Mittelstadt Funeral Home, 902 E. Main St. in Lake Mills. At 6 p.m. a brief time of prayer and sharing will be led by Kermit Singelstad.

Private family inurnment will take place at a later date.

Larry Lee Shirk was born Jan. 25, 1935, in Brush Creek, the son of Simon and Helen (Schnoor) Shirk. Larry graduated from Albert Lea High School in 1953. He entered the United States Army in February of 1956. Larry was stationed in Japan for 2 1/2 years and was honorably discharged in February of 1959.

Following his service, Larry worked at G&H Motor Parts in Forest City. In 1963, Larry started working at Deluxe Products where he met the love of his life, Corinne Rippentrop. The couple was married at the Little Brown Church in Nashua, Iowa, Oct. 28, 1966. Larry retired from Fleetguard Industries after 30 years of employment.

The family wishes to thank all who helped support the family by keeping them in their thoughts and prayers.