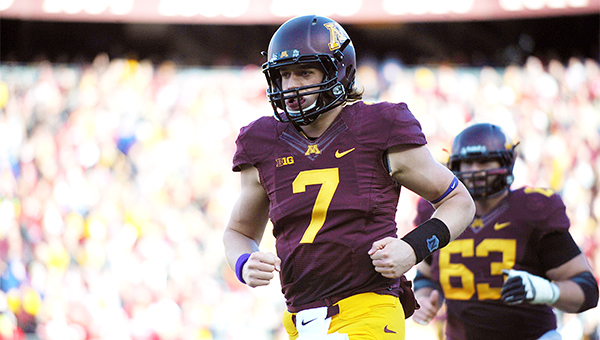 MINNEAPOLIS — For the first time since coach Jerry Kill took over, Minnesota has made significant progress.

In 2013, the Gophers doubled their Big Ten victory total of the previous two seasons. The eight wins were the most the program has had in a decade.

Oh, but taking that next step can be tough. Minnesota must find a way to improve an offense that went 13 straight quarters last year without a touchdown until a couple of late scores in a bowl loss to Syracuse. Three starters from the defense are currently in NFL training camps.

Then there are those trips to TCU, Michigan, Nebraska and Wisconsin plus back-to-back November home games against Iowa and Ohio State. But the Gophers believe the confidence gained last season set the foundation for greater success, which Kill told the players after the Texas Bowl they should be “starving” for.

Here are five things to know about the upcoming season for the Gophers:

Philip Nelson left the program, so sophomore Mitch Leidner was given the reins. While Nelson and Leidner were switched often last year, even in games when both of them were healthy, Kill said the coaching staff made a mistake by rotating them too much and creating instability.

With clarity established at quarterback, at least four games of starting experience for the five projected offensive linemen (Ben Lauer, Zac Epping, Tommy Olson, Foster Bush and Josh Campion) and assumed improvement by a raw group of wide receivers, the Gophers have the building blocks of a more-productive offense after ranking next-to-last in the conference last season with an average of 343 yards per game.

“This year it’s just a different foundation. We know Mitch is our guy,” running back David Cobb said.

Cobb rushed for 1,202 yards last season, ending a streak of six straight years for the Gophers without a 1,000-yard guy.

With fellow senior Donnell Kirkwood and bruising junior Rodrick Williams toting combined career totals of 1,975 yards and 14 touchdowns behind him, there’s as much depth in this backfield as when NFL players Marion Barber and Laurence Maroney shared carries 10 years ago. Berkley Edwards, a prize of the 2013 incoming class who severely sprained his ankle in practice and took a redshirt season, is also in the mix.

Minneapolis native and touted recruit Jeff Jones has been accepted to the university but not cleared academically by the NCAA due to low ACT scores. The Gophers are hoping he can practice this fall and be ready to contribute in 2015.

“He understands where he’s at,” Kill said. “We need him next year more than anything.”

Defensive coordinator Tracy Claeys, who led the team when Kill was ill and unable following epileptic seizures, engineered the group that finished fourth in the Big Ten with 22.2 points allowed per game.

“I can’t really put my finger on what it is about him, but you know that he’s giving everything he has,” said defensive tackle Cameron Botticelli.

Beating Nebraska was this team’s biggest accomplishment of 2013. Wisconsin, which owns a 10-game winning streak in the series, is the next giant to slay. The Gophers finish the season with consecutive road games against the Huskers and Badgers.

“We expect those other opponents to look at us and know this is not the same Minnesota of the past,” Cobb said. “They’re going to have to come ready to play. … We feel like everybody on the schedule, we can beat. Home or away, we expect to win.”

The Gophers are sharing their stadium the next two years with the Vikings while the NFL team’s new facility is built. The chance to see pros like Adrian Peterson up close can’t hurt, right?

“If I get a chance, I’m going to have to slip AP a letter,” Cobb said, smiling.